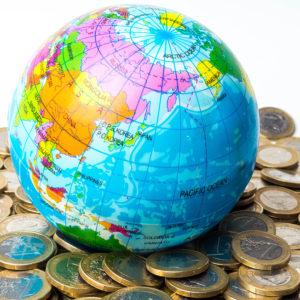 Trouble Ahead for the Global Economy

It is not often that global bond markets and global stock markets simultaneously hold as divergent a view as they do today as to the world economic outlook.

A clear sign that global bond markets are increasingly concerned about the world economic outlook is that a record $13 trillion of foreign government bonds now offer negative interest rates. A clear indication that bond markets are worried about the possibility of a U.S. economic recession is that U.S. long-term interest rates are significantly below short-term interest rates. This so-called yield curve inversion has in the past consistently proved to be a highly reliable indicator of an impending recession.

Evidently the world’s central banks share the bond market’s gloomy economic outlook. No longer is the Federal Reserve talking about raising interest rates but rather it is contemplating when to start cutting rates. Meanwhile the European Central Bank is now raising the possibility that it will soon resume its aggressive bond-buying program to stimulate a weakening European economy.

To be sure, bond markets and the world’s central banks are generally sensitive to economic and political risks. However, what seems to have them now on high alert is that this time around there are an unusually large number of such risks that have as high chance of materializing. Furthermore, they worry that it if those risks do materialize they would have the potential to destabilize both the U.S. and the global economies.

Among the more immediate of these risks is that the United Kingdom, the world’s fifth-largest economy, could crash out of the Euro without a deal. Both the Bank of England and the International Monetary Fund are warning that such an occurrence would most probably result in a 5 percent decline in the U.K. economy in the year immediately after its European exit. This would be bound to have significant spillover effects to a European economy that is already on the cusp of a recession.

Heightening the chances of a hard Brexit is the commitment by Boris Johnson, who is almost certain to become the next U.K. prime minister, to have the U.K. leave the European Union with or without a deal on October 31. That is when the U.K.’s extended deadline to negotiate a Brexit deal with the European Union ends. Johnson is making this commitment to fend off a mortal challenge to the Conservative Party from Nigel Farage’s surging Brexit Party.

Seemingly, the only thing that can stop a hard Brexit would be a successful vote of no confidence in the government before October 31. However, this would hold out the prospect that a very market-unfriendly Jeremy Corbyn could become prime minister, which would be bound to undermine U.K. investor confidence.

A more serious, albeit less imminent, threat to the global economy is the risk that we could have a recurrence of the Italian sovereign debt crisis. With the Italian economy being approximately 10 times the size of that of Greece and with it having the world’s third-largest sovereign debt market, an Italian debt crisis would pose an existential threat to the Euro’s survival that would almost certainly reach our shores.

Heightening the risk of an Italian debt crisis is the reckless policy path on which its populist government is embarked. At a time that the country is already saddled with Europe’s second largest public debt to GDP ratio after Greece, the Italian government is insisting on the introduction of a large unfunded tax cut that would raise its budget deficit to around 5 percent of GDP.

President Trump’ America First trade policy constitutes a further major source of risk to the global economy. Not only is the deterioration in U.S.-China trade relations and the accompanying import tariffs on China already causing a significant economic slowdown in China, the world’s second-largest economy. Trump’s threat to slap a 25 import tariff on European automobiles sometime later this year could be the final straw that pushes an already ailing German economy into recession.

Sensing these risks, as well as that coming from heightened geopolitical tensions in the Persian Gulf, the world’s major central banks have become decidedly more dovish than before. Meanwhile, sensing that real economic trouble is brewing abroad, global bond markets are now anticipating that a weak global economy will lead to several interest-rate cuts in the year ahead.

A key question that equity owners should be asking themselves right now is whether they might be missing something that the central banks and the global bond markets are seeing.