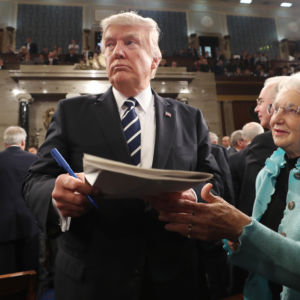 The White House detailed during a press conference Wednesday how it hopes to reform the tax code in order to promote economic growth.

“This is quite a historic day for us, and one that we’ve been looking forward to for a long time,” Cohn told reporters. “We have a once-in-a-generation opportunity to do something really big. President Trump has made tax reform a priority, and we have a Republican Congress that wants to get it done.”

Cohn adds the plan will simplify the tax code by taking all seven income brackets and reducing them to just three. The plan will also lower rates for upper and middle-income earners. Additionally, it is designed to end the death tax and repeal the alternative minimum tax to further simplify the system while reducing burdens on taxpayers.

“This isn’t going to be easy, doing big things never is,” Cohn said. “We will be attacked from the left, and we’ll be attacked by the right. But one thing is certain, I would never bet against this president. He will get this done for the American people.”

Cohn adds the plan is also designed to promote capital investments to spur economic growth. The plan will return the top capital gains tax rate and dividend tax rate to 20 percent by repealing the 3.8 percent tax that was imposed to support the Affordable Care Act.

The tax code hasn’t been overhauled in any significant way since 1986. The tax system is incredibly difficult to reform because of how complex and politically divisive it is. Carnegie Mellon University Prof. Jeff Kupfer notes that having the administration involved is critical to actually getting something passed.

House Speaker Paul Ryan and Rep. Kevin Brady introduced a blueprint last year which included many of the same provisions. The blueprint was also designed to simplify the tax code and reduce rates. The border adjustment tax is one major provision in the blueprint that wasn’t mentioned during the press conference.

The border adjustment tax has become a major point of contention. It is a value added tax levied on imported goods. It is essentially applied when a product is produced in a foreign country but sold domestically.  The provision has split those on the right, including many who support the blueprint generally.

Trump announced the press conference while signing an executive order last week. He noted at the time that his administration has already been laying the groundwork to get tax reform done.