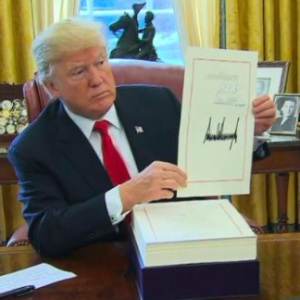 An important element of the Tax Cuts and Jobs Act (TCJA) was an effort to repatriate, or bring back, cash that was held in overseas accounts. By lowering the barrier to repatriation of overseas profits, tax law writers hoped to encourage corporations to bring back their overseas holdings and reinvest them in the United States. Yet despite the fact that cash repatriation more than quadrupled in 2018, media outlets are seizing on poorly thought-out statements from the White House to declare repatriation a failure.

Under prior law, multinational corporations headquartered in the United States faced a 35 percent tax on any earnings from their foreign subsidiaries that they sought to bring back to the United States. As this tax discouraged these businesses from returning overseas cash to the United States, the TCJA repealed it and replaced it with a much lower one-time tax on overseas assets, whether it was repatriated or not.

This smarter approach has yielded results. In 2018, corporations repatriated $665 billion in assets — a substantial increase over the $155 billion brought back in 2017 before the TCJA was enacted. That represents an infusion of investment cash that will benefit American businesses and workers.

That hasn’t stopped the media from finding a way to bash the effort to encourage repatriation as a failure, however. After all, President Trump at one point had promised $4 trillion in repatriated cash, and $665 billion is nowhere near that number.

Yet this effort to take at face value this $4 trillion number offered by a president frequently criticized by these same journalists for a tendency to exaggerate is disingenuous. After all, most estimates suggest that there were only about $2.7 trillion in profits stuck overseas before TCJA. On top of that, only around half of that amount is held in liquid assets such as cash — non-liquid assets are unlikely to be brought back, particularly in the first year after the implementation of tax reform.

Setting aside the President’s overeager $4 trillion estimate, the real story here is that, in the first year following the passage of the TCJA, companies repatriated nearly half of their overseas liquid assets. If the goal is to bring overseas cash back into the United States, that’s an encouraging and certainly positive pace — after all, no matter the incentives, global finance is too complicated to expect businesses to immediately be able to shift all their cash parked in foreign subsidiaries back to the United States.

Some opponents of the TCJA have argued that repatriated dollars have only fueled stock buybacks and thus hasn’t contributed anything positive to our growth prospects. However, this misunderstands the role of buybacks in the economy. Taking place only in the absence of productive investments, stock buybacks allow the market to shift investment dollars to businesses that do have productive investments left to make and are in need of capital.

Others have alleged that overseas cash was “accessible” despite U.S. tax law because corporations could borrow against it, but borrowing has costs, both in terms of financial resources and time processing paperwork. Even if the only thing repatriated income did is displace the need to borrow against foreign earnings, that’s a productive step. Whether the investment comes directly or a few steps down the line, repatriated cash can only help the economy.

In this context, it’s unfortunate that media outlets are choosing to seize on the President’s statements to misrepresent the success of the TCJA’s efforts to return overseas cash to the United States. Taxpayers should not be fooled — the TCJA directly resulted in a massive boost to repatriation of overseas profits, bringing overseas cash back to the country. Media spin doesn’t change that.