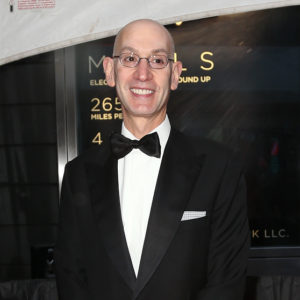 Unhappy Times for the NBA and GM

On March 1, Adam Silver, the respected commissioner of the National Basketball Association, offered some startling remarks about the pursuit of happiness.

Speaking at the 13th annual MIT Sloan Sports Analytics Conference in Boston, Silver shared this bizarre revelation about his players: “When I meet with them, what surprises me is that they’re truly unhappy. A lot of these young men are generally unhappy.’’

Unhappy about what, Silver was asked.

Silver responded that he sensed many players are beset by loneliness and isolation because of living under a Shaquille O’Neal-size magnifying glass.

Even though they are part of a team?

On the surface, that’s tough for many critics to swallow without a monstrous dose of skepticism. One of those outspoken critics was Charles Barkley, the Hall of Famer who spends his work time as a loquacious NBA analyst for TNT Sports.

Barkley drew a clear line in the sand, blurting, “I think that’s probably the stupidest thing I’ve ever heard Adam say. That’s the stupidest thing I ever heard any commissioner say. Listen …  these guys are making $20-, $30-, $40 million a year. They work six, seven months a year. We stay at the best hotels in the world. They ain’t got no problems. That’s total bogus.”

Five days after Silver delivered his comments, workers at a struggling General Motors auto plant in Lordstown, Ohio, held a tearful goodbye. Those employees were saying adios to the Chevrolet Cruze, a compact car that apparently has gone out of style.

Their plant was closing, as GM shifts from compacts to increased production of SUVs, trucks, electric cars and self-driving vehicles. Yes, GM is transferring its efforts from the pedestrian passenger cars to the sexier stuff.

The blue-collar employees took photos of the last Chevy Cruze coming off the assembly line.  A U.S. flag was draped across the car’s hood. Born in the U.S.A.

Understandably, many of the assembly workers were saddened and anxious. And, of course, beyond unhappy. That’s 1,700 jobs gone. According to the Associated Press, some of the employees may have the option to transfer to GM plants in other towns in the South and the Midwest.

But, for some, that possibility appeared to be of little consolation as Jeff Nance, who had worked at the Lordstown plant for 17 years, told the Associated Press, “It’s frustrating. I’m angry and bitter. Watching that last car go by was a kick in the gut.”

A kick that assuredly also deposited that feeling of loneliness and isolation mentioned by Silver.

Note that, since 1990, wages for U.S. auto workers have declined 18 percent, adjusted for inflation, according to CNN. And, as of 2017, only 8 percent of U.S. factories in the auto manufacturing industry offered pensions.

The average annual NBA salary today is $8.3 million; retired players get a generous pension; the average NBA salary during the 1984-85 season was $300,000. Presumably, Silver is concerned about anxiety and depression among his players. Does the league have a palpable mental-health problem?

Last season, two star NBA players — Kevin Love of the Cleveland Cavaliers and DeMar DeRozan, then of the Toronto Raptors — appeared in television commercials discussing their battles with stress, depression and anxiety that required therapy. Love, in fact, last season left during a game and was hospitalized because of a panic attack.

So, despite the cynicism, we cannot be tone-deaf here if some NBA players have legitimate medical/clinical mental-health concerns. However, what about the NBA’s issues regarding this general state of unhappiness?

Anyone can be anxious or nervous about starting a lofty, new job for a venerable Fortune 500 firm or losing a position after double-digit years of dedication and pride. But that doesn’t automatically denote a clinical aspect to their anxieties, so don’t conflate these issues.

The average person isn’t constantly scrutinized in the public forum as NBA players. Several players this season have complained about their treatment on social media. Fans can verbally attack them and critique their play and actions incessantly on Twitter, Facebook and InstaGram. And there’s TMZ.

All of this is a huge part of the players’ gripes, Commissioner Silver explained.

But some players appear to want their rarefied celebrity status both ways. That is to say, some want to assume that celebrity mantel when it’s convenient, then dismiss it when it’s an albatross.

A few weeks ago, a visibly agitated Kyrie Irving, star player for the Boston Celtics, barked to the working press, “I didn’t really come into this game to (have) cameras in my face, be famous, be a celebrity, whatever embodies that. It’s a little hard for me.”

Can’t be that hard because Irving also appears in movies and national TV commercials. Yet, he’s saying no to celebrity-hood — and the cameras.

On March 11, Oklahoma City Thunder star Russell Westbrook got into an incendiary courtside confrontation with a husband-and-wife couple whom Westbrook claimed went over the line in their in-game fan heckling. The video has gone viral.

Still, one item is clear: It’s much easier dealing with scrutiny and hardships in life when your bank accounts feature seven or eight digits behind the dollar signs.

Those displaced auto workers in Lordstown, Ohio, undoubtedly could give The Commish and his players a lesson on that.