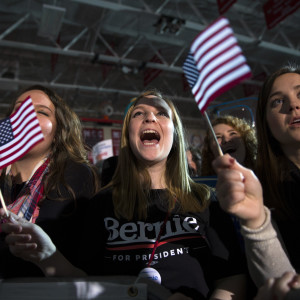 Former Secretary of State Hillary Clinton remarked this week how “amazing” it is that she lost young voters at the Iowa caucuses to Vermont Senator Bernie Sanders by 70 — yes, 7-zero — percentage points. And though it is a margin normally seen only in sham elections in dictatorships, it’s not amazing at all. And it’s happening in New Hampshire, too.

Young voters — in this case, those between 17 and 29 years old — didn’t experience the prosperous 1990s over which a Clinton with the first name “Bill” presided, a time when financiers of all stripes, from venture capitalists to hedge funds to investment bankers, strutted around as the titans of capitalism. Their socialization came during and after the financial crisis and the searing Great Recession.

And in an election that has featured dueling visions for how to penalize or further regulation of Wall Street, there’s really only one candidate who can offer a visceral, if somewhat vague, prescription for what to do with bankers: Sanders.

The same dynamic is taking shape in the Granite State, where the first-in-the-nation primary is only days away. A tracking poll by the University of Massachusetts-Lowell found that 87 percent of voters 17-29 years old will vote for Sanders, with only 13 percent breaking for Clinton. Yes, the result in this demographic could actually be worse for Clinton in New Hampshire than it was in Iowa.

Robby Mook, Clinton’s campaign manager, played down the loss of young voters by appealing to her image as an experienced hand on the tiller.

“The difference for young voters and for all voters is the ability to get something done,” Robby Mook, Clinton’s campaign manager said in an interview with MSNBC this week. “And what that takes is someone in Washington who can break through the gridlock.”

But that may be a difference that doesn’t matter to younger voters.

A survey of young people’s political leanings by Harvard University’s Institute of Politics published in the spring of 2015 suggested Millennials have a deep-seated loathing of Wall Street. Asked whether they’d vote for a candidate who was right on every other issue besides regulating big banks, 71 percent said they would oppose the candidate or consider doing so. A quarter said they’d still back the candidate.

Issues that generate that kind of passion are rare in American politics, and political scientists call people who adhere to them “single-issue voters.” Slavery was one, but not always. Prohibition came about in large part because a chunk of the electorate would back dry candidates, no matter the party or position on any other issues. And in our own lifetime, the gun control debate generates similar political behavior.

Put another way, if young voters don’t like Hillary Clinton’s perceived closeness to Wall Street, then they will consider voting for any other candidate than the former First Lady that demonstrates sufficient contempt for high finance.

Nor does it seem to matter that Sanders’ program for Wall Street has more metaphor than means behind it. He is demanding reinstatement of Glass-Steagall, a Depression-era law that separated commercial and investment banking but was repealed in the 1990s. The next Congress won’t be buying it, even if President Sanders is in the White House.

Compare that with the Clinton view, laid out in detail in an op-ed in The New York Times. It includes legislative proposals that would face a tough slog in Congress, but also regulatory measures that President Hillary Clinton could begin executing her first day in office. And it includes a thoughtful rebuttal of the case for bringing back Glass-Steagall.

Most of the last decade has been suffused with a scorn for “Wall Street” — a metaphor for big banks and high finance in general — that’s penetrated the political and popular culture.

Ten years ago, students graduated from elite universities and headed to jobs in finance. Young-ish hedge fund managers turned into objects of adoration. International bankers ruled the roost at big cosmopolitan gatherings like the World Economic Forum in Davos, Switzerland.

When criticism of Wall Street that pervasive endures for nearly a decade, it’s bound to rub off on voters who were never immerse in any other zeitgeist. And part of that criticism, grounded very much in reality, is that the Clinton clan has always had close links to Wall Street.

“They would look at Secretary Clinton and see someone who was an insider and very much a part of many of the problems with money and politics and growing polarization,” Dyck said.  “Distrust fuels votes and motivation for something else, someone else, anyone else than those who are considered part of the status quo.”

The best that can be said for Clinton’s status among young voters is that it’s a bloc whose track record doesn’t suggest reliability, whereas Clinton is much stronger among older voters.

The Census Bureau found that 45 percent of eligible voters aged 18 to 29 actually cast a ballot in the 2012 election. But 72 percent of the 65-and-older set went to the polls at the end of that hard-fought campaign.

Yes, young voters are motivated. They still have to prove they are not lazy.