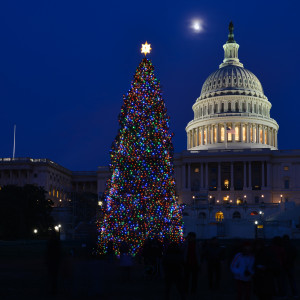 As 2015 winds down, Wall Street is looking forward to a holiday. Not the kind that families around the world celebrate on Dec. 25, but that uniquely Washington kind of celebration in which gifts, in the form of bank-friendly legislation, get hung on “Christmas trees” — Capitol Hill slang for big, must-pass bills.

The twist these days is there’s a grinch named Sen. Elizabeth Warren who is determined to put a damper on the financial festivities.

Since lawmakers passed a landmark overhaul of American financial regulation in 2010, congressional Democrats and the Obama administration have successfully fought changes to the law, known as Dodd-Frank. Among the proposed changes, Republicans have sought to restructure the Consumer Financial Protection Bureau or ease the regulatory burden on mid-sized banks, which have struggled to differentiate themselves from Wall Street behemoths.

In those five years, Republicans have never had such clear opportunities to pass bills with provisions that President Barack Obama clearly doesn’t like — but that he might sign anyway, just for the sake of ending budgetary wrangles that have paralyzed Washington. That’s why groups that fought for Dodd-Frank are on high alert, trying to stop Democrats from defecting and keeping Republicans isolated.

“In spite of the importance of these reforms, and their broad popularity, some members of Congress are nonetheless attempting to use the appropriations process to roll them back, putting the public interest at risk to deliver a wish list to narrow Wall Street interests,” Americans for Financial Reform, an umbrella organization of labor unions, civil rights groups and consumer advocates, wrote lawmakers on Oct. 28.

Big-bank critics are mindful that they lost a round last December, when JPMorgan Chase and Citigroup lobbyists secured a change to Dodd-Frank rules on complex financial instruments known as swaps. Warren, the Massachusetts Democrat and progressive icon who tried unsuccessfully to defeat that bill, is rallying her troops for a similar battle as December approaches.

“The law isn’t perfect, and some of us think we need more accountability to make sure big financial institutions don’t threaten the economy again, but House Republicans are pushing in the opposite direction,” Warren wrote in a Facebook post.

The battle is set to play out on both sides of the Capitol. For much of November, staffers in both houses of Congress will negotiate and lobbyists will maneuver as Congress hashes out the details of what it will send to Obama for signature at year’s end.

“December is when the sausage is fully cooked,” said Richard Hunt, president of the Consumer Bankers Association, a lobby group of major banks. “November is when it’s actually being made.”

Five years after a crisis that shook the foundations of finance, Warren has public opinion on her side. A Washington Post/ABC News poll published Oct. 20 found that 72 percent of Democrats, 58 percent of Republicans, and 68 percent of independents want the next president to pursue tougher regulations on banks.

That public distrust has forced Wall Street — and financial services writ large — to make oblique arguments that don’t tackle head-on the unpopularity of the industry across the entire electorate. Republicans, trying to avoid an explicit alliance with Wall Street, regard their legislation as “reforms of the reforms” that Dodd-Frank made.

The House Financial Services Committee, for example, approved legislation to ease regulatory burdens on Tuesday that banks large and small have sought for nearly five years. Rep. Jeb Hensarling, the Texas Republican who chairs the panel, made exactly that case.

“The reform bills approved by the committee today will help build a healthier economy for all Americans and put in place needed transparency, accountability and checks and balances on powerful bureaucracies,” Hensarling said.

One of those bills would ease the regulatory requirements for major regional banks, such as Capital One or Keybank, which have complained that the Dodd-Frank law treats them like Wall Street, even though they didn’t cause the financial crisis. Another would restructure a Treasury Department body that keeps an eye on the largest financial companies.

Treasury Secretary Jacob Lew, by contrast, invoked the 2008 financial crisis, and giant banks, as a reason to oppose Republican efforts.

“Rolling back needed oversight and weakening safeguards for our largest and most complex financial companies is the wrong approach and the wrong lesson from a crisis that far too many American families continue to recover from,” Lew wrote Hensarling the same day.

Not everything that’s making its way onto the congressional Christmas trees is a priority of banks. The debt collection industry, for example, secured a provision in a highway transportation funding bill that would require the Internal Revenue Service to outsource collection of delinquent tax debt to private collection agencies.

The idea has been tried before, in 2003, and the IRS actually lost money on the program because of high administrative costs, according to the Office of the Taxpayer Advocate, a sort of internal IRS watchdog. The IRS itself, on the other hand, collected $3.9 billion in delinquent taxes by patiently waiting until some taxpayers, hard-hit by the recession, were ready to pay, and then garnishing their refunds, something privateers can’t do.

Chi Chi Wu, a lawyer with the National Consumer Law Center, said the legislation pushes a narrow agenda that’s not in the public interest. “You can’t get blood from a stone, but private debt collectors will try to get blood from stone, no matter what the cost to the taxpayer,” Wu said.

The opportunities to change Dodd-Frank will come thick and fast over the next month as Congress works its way through the annual appropriations bills — each one a Christmas tree of its own — that detail how the government will allocate the money authorized by the broad budget compromise reached by Obama and Republicans in October.

Sen. Richard Shelby, an Alabama Republican, isn’t just chairman of the Senate Banking Committee; he’s a seasoned budget warrior who also sits on the Appropriations Committee. He has already pushed a bill through his own committee on a party-line vote, and he’s now betting his years doling out money — more than a few buildings in Alabama bear his name — will help him find a way to attach regulatory changes to spending bills.

“It’s certainly fair to say that he’s spent most of his career swimming in the appropriations pool,” said Mark Calabria, director of financial regulation studies at the Cato Institute, and a former Shelby staffer. “And he is not shy about using appropriations for policy changes.”