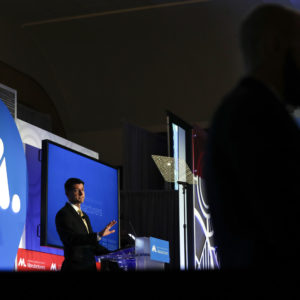 House Speaker Paul Ryan of Wis., speaks during the National Association of Manufacturers (NAM) 2017 Manufacturing Summit in Washington, Tuesday, June 20, 2017. Overhauling the nation's tax code in a once-in-a-generation opportunity, says House Speaker Paul Ryan, who is promising to act by the end of the year despite political divisions among Republicans and a crowded legislative agenda for Congress. (AP Photo/Carolyn Kaster)
[IS] Opinions

Welcome to the World of Unintended Consequences — Tax

An open letter to the tax writers of Congress:

Even us laymen, us non-economists have opinions about taxes. We pay them. We also benefit from loopholes and are punished for being not rich enough to have investments that lighten the tax load.

Those at the bottom of the tax ladder seem to pay their taxes with more equanimity than those at the top.

For more than three decades, I operated a small business. Over the years, I employed hundreds of people and all were keenly interested in what they would be paid, but none — not one ever — asked what their take home pay would be or how that could be finagled, as with benefits. In business parlance, they were interested only in the top line, not the bottom line.

By the same token, other small businesses seemed to be unbothered by taxation, although they all relied on accountants to get them the best deal. Taxes were not a subject that came up in in our trade association meetings. T.J. Zlotnitsky, a member of the progressive Patriotic Millionaires, told me that he and other very successful businesses were not crippled by taxes and saw them as a necessity — a cost of being in business, if you will. Billionaire Warren Buffet and economist-actor-writer Ben Stein echo that view.

But big business, unlike small business, and its agents from trade associations to their lobbyists, believes that tax rates are the problem. Take the issue of U.S. companies whose offshore subsidiaries earn profits that are retained in foreign countries to defer paying U.S. corporate tax. It is an act of Republican theology that this money would come back instantly to the United States if the tax threat were removed and that it would be invested in new enterprise, plant and products here.

It is as likely that this money will be used to buy back stock. There are plenty of companies right here in the United States sitting on billions of dollars, not investing them either here or overseas. Explain, please.

Perhaps tax rates, assuming they are the effective rate that will be paid (seldom the case), should be thought of in terms of pricing. Pricing is a whole science, possibly an art. There is a sweet spot in pricing where buyers and sellers agree.

For President Trump and Congress to say that sweet spot is 20 percent for corporations and 35 percent for individuals is arbitrary. Despite company “inversions,” where they move their domicile to tax-friendly countries, corporations, as measured by earnings, are doing nicely, thanks.

It is true that high tax rates discourage investment and lead to capital flight. But there are glaring exceptions: Why are companies flocking to high-tax Massachusetts rather than low-tax New Hampshire?

My own guess is that the sweet spot is between 25 percent for corporations and 30 percent for individuals. I expect to be disabused.

New York, by national standards, is heavily taxed, but businesses and people are pouring in. Explain perceived value, please.

Yet after World War II, when taxes really were too high in Britain, many moneyed people, including almost all the film stars, established residences in Switzerland to escape confiscatory taxes: 90 percent was just too much for the likes of Noel Coward and David Niven. Ninety percent was a sour spot, very sour.

Then, there is the highly speculative issue of how tax reduction will trigger growth. It is an argument that would not pass the loan committee at the local bank: the idea that increasing debt now will lead to huge growth later. Take a piece graph paper and draw an ascending line, make no provision for recession, war or, as now, acts of God. Is it believable?

Finally, there is the vexing question of estate taxes, which — with fiendish cleverness — the opponents have labeled “death taxes.”

The fact is that if you remove or reduce these, you guarantee less revenue. But, more important, in a time when the economy has created many billionaires, you risk the creation of super class of Americans, rich in perpetuity and growing richer with even the most conservative investments: a feudalization of the United States.

Is that the America which is great (again)?

Taxation is all about unintended consequences.