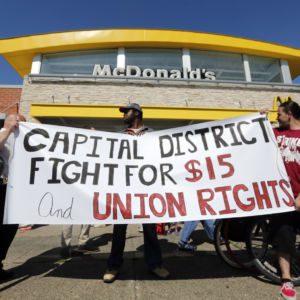 Supporters of a $15 minimum wage for fast food workers rally in front of a McDonald's. (AP Photo/Mike Groll)
News

Which City Will Actually Get the $15 Minimum Wage First?

Numerous cities across the country have now passed a $15 minimum wage, but none of the hikes have been fully implemented as they’re designed to phase in gradually.

Seattle was followed by over a dozen cities when it became the first to pass the $15 minimum wage in June 2014. The city made history but won’t see the increase implemented for all workers until 2021. Mountain View and Sunnyvale in California, however, are on course be the first to implement the policy because of their short phase in periods.

Mountain View and Sunnyvale both passed the policy within the last year. Nevertheless the cities will both reach the $15 mark at the very start of 2018. Lawmakers have designed the increases to include phase in periods in the hopes of mitigating any the financial stress it might put on employers.

“Unfortunately, the lags also make it more difficult to analyze employers’ responses,” University of California, San Diego Professor Jeffrey Clemens told InsideSources. “It will be difficult to disentangle the effects of slowly implemented minimum wage changes from the effects of other slow-moving economic developments.”

Cities elsewhere have included provisions that will allow certain classes of workers to reach $15 an hour earlier. Seattle businesses with more than 500 employees will have to start paying at least $15 an hour by 2017. Syracuse, New York, has already reached $15 an hour but only for public-sector workers.

Additionally San Marcos, Texas, will not allow companies to qualify for certain tax breaks unless they start paying their workers at least $15 an hour. Texas cities are not allowed to require their own minimum wages. Cities elsewhere have included similar provisions to increase wage for some workers.

New York and California both became the first states Apr. 4 to raise the minimum wages to $15 an hour. Washington D.C. passed the increase not long after. Their increases are also designed to phase in over a few years. States and cities that haven’t yet enacted it could still become the first but they would have to have a very short phase in period.

The Fight for $15 movement has been at the forefront of the policy battle since it started in 2012. The movement has utilized media campaigns plus protests to pressure lawmakers into supporting the policy. It is also highly funded by labor unions which has helped it grow and become influential.

Economists have been fairly split on whether minimum wage increases are beneficial or not. Numerous studies have come out showing the $15 minimum wage could have both good and bad outcomes. While it would increase pay for low-wage workers it could also limit employment opportunities.

The National Bureau of Economic Research and The Heritage Foundation found the increase will have a huge impact on employment. They found the risk is especially bad for young and low-skilled workers. The University of California, Berkeley found any losses would be marginal compared to the potential benefits.