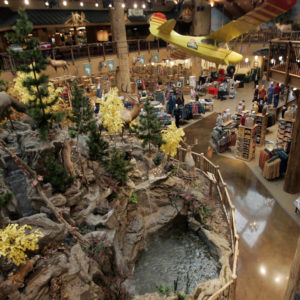 Customers are greeted as they enter the Cabela's outdoors goods store in East Hartford, Conn., with the sight of an artificial mountain and a full-sized airplane. (AP Photo/Bob Child)
[IS] Opinions

Cabela’s, the outdoors retailer, has long been one of my favorite shopping destinations. It’s not simply a store brimming with fishing and hunting equipment. It’s an experience. Even when I don’t need anything, I will drive 80 miles from my hometown in Ohio to watch the fish in the aquarium, study the taxidermied game, or play in the shooting gallery. I inevitably purchase something. It’s a smart business model.

But the company now appears headed for a sale, and sadly, thousands of jobs may be lost as anti-gun advocates value a meaningless protest over the livelihood of hardworking families.

Dick Cabela, helped by his wife, Mary, founded his eponymous brand in 1961, assembling fishing flies at a kitchen table. Dick’s brother, Jim, joined the company in 1963. The company would grow to encompass 82 retail locations, large real estate holdings, data and warehousing centers, and even its own bank.

The road to a sale, however, was nearly inevitable after Dick passed away in 2014. The stock has declined nearly 25 percent since then, with another quarter of weak earnings released at the end of July. According to news reports, Jim Cabela, now chairman of the board of directors, is rarely at the company’s offices. The Cabela family does not have a strong presence in corporate leadership.

And so with the company underperforming, it has been looking for a suitor, of which the most likely buyer appears to be Bass Pro Shops—Cabela’s closest competitor. If Bass Pro Shops is the buyer, the two very-similar brands would consolidate. There would be no need for two corporate headquarters, merchandise return centers, call centers, and other offices. Cabela’s headquarters is in Sidney, Nebraska, a town of only 6,800, where 2,000 people are directly employed by Cabela’s—and the entire local economy is dependent on the company. Thousands of other jobs in Nebraska and nationwide would also likely be lost in a merger with Bass Pro Shops.

There is an alternative. Upheaval is less assured if the company is acquired by a private equity firm. Private equity would look to find inefficiencies and retool some operations, but the outcome is probably much sunnier for current Cabela’s employees.

The problem is that private equity is leery of the purchase. Firms had shown interest earlier this year, but a mid-July report from the New York Times stated that the New York City employee pension fund was threatening to withdraw its money from any private equity fund that purchased Cabela’s. At issue is simply that Cabela’s, a hunting retailer, sells guns. The New York divestment push is part of a larger effort by anti-gun advocates to have major institutional investors abandon all gun holdings.

In this instance, the case is clear that the anti-gun lobby is ready to sacrifice thousands of American jobs on the altar of a euphemistic gesture.

Regardless of whether private equity or Bass Pro Shops buys Cabela’s, the company will still sell guns. Regardless of whether every Bass Pro Shop and Cabela’s were to shut down tomorrow, guns will still be sold in America. The fact of the matter is that divestment campaigns are entirely pointless. They may temporarily depress the price of an asset during a sell off, but this does no harm whatsoever to the company. If the share price even declines as a result of divestment, it will quickly be back to its fair market value as investors (and computer algorithms) spot the low-priced shares.

At best, divestment campaigns are simply ignorant of how the stock market works. At worst, that ignorance deprives pension funds of money that could improve the lives of retirees. Share prices of firearms manufacturers have surged in the past decade as gun sales have risen. Divestment limits investment options and can force pension funds to purchase assets with lower returns. In this case, divestment hurts both the workers invested in pension funds along with workers at Cabela’s. And it does this while accomplishing nothing in its goal of keeping guns away from dangerous people.

There is an entirely legitimate debate to be had over gun control. Too many dangerous people are able to get their hands on guns. More importantly, too many deranged sociopaths go without medical treatment and have few social connections with friends and family to monitor their state of mind. Much has been written on this issue elsewhere, and suffice to say many reasonable people have very different opinions about potential policy prescriptions.

But what is certain is that the potential loss of thousands of jobs is not an appropriate way to make a contentious political point without a clear solution.