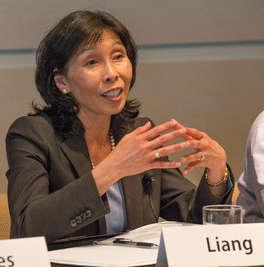 Why Did President Trump Pick A ‘Frank-Dodd’ Democrat for the Fed?

She’s a fan of higher interest rates. She supports Dodd-Frank-style, big-government regulation. The liberal Bloomberg editorial page wants the Senate to “act quickly to confirm her in the job, before the president has second thoughts.”  Plus—she’s a Democrat.

So why did President Trump pick longtime Washington bureaucrat Nellie Liang to fill a seat on the Federal Reserve?

“It’s got to be part of a political deal,” Paul Kupiec of the American Enterprise Institute tells InsideSources. “For a free market person who wants to deregulate the economy and limit the Federal Reserve’s powers, she’s certainly not your first pick.”

Trump’s former political right-hand man isn’t happy about it, either.  In an opinion piece for The Hill, Corey Lewandowski complained that the “new Fed policies hiking interest rates and restricting opportunities for new capital infusions as being hostile to the many Trump policies that have turbo-charged the economy,” and he suggested that the president “fire a torpedo across the bow of the Fed” by withdrawing her nomination.

On paper, Liang would appear to be a last resort for a president who’s bragged about his deregulation successes and is currently jawboning the Federal Reserve to slow down on raising interest rates. Plus, Liang is—to use President Trump’s phrase—“part of the swamp.”  She’s spent virtually her entire career working at the Fed in various policy research roles before leaving to join the Brookings Institute, a liberal think tank, last year.  It’s hardly a surprise, then, that liberal senators like Sherrod Brown (D-OH) welcomed her appointment.

“I’m hopeful that she has more sense than some of the people they put on,” Brown, ranking member on the Senate Banking Committee, told The Intercept.

His Republican colleagues, however, appear less than thrilled. Sen. Thom Tillis (R-NC) released a statement to InsideSources reading in part: “Senator Tillis has serious concerns about Nellie Liang due to several policy positions she laid out during her time at the Brookings Institute. Earlier this year, the Senate Banking Committee passed S.2155 on a bipartisan basis to give relief to community banks and small business across the country, and it is not clear that Ms. Liang will be an advocate for reducing some of the undue burden regulations place on banks all across the US.”

The reaction from Tillis’ fellow Republicans on the committee was also underwhelming.  Sen. Mike Crapo (R-ID), chairman of the Banking Committee, first found out about President Trump’s nomination of Liang when it happened.  “I’m going to take a fair but thorough look into her background, Crapo said after her nomination. “Right now I have not reached a conclusion.”

Politico quotes an anonymous GOP source in the financial services industry: “To say Nellie Lang’s nomination has caused ‘rumblings’ would be putting it kindly. An increasing number of Republican senators, along with financial industry leaders, believe she does not reflect an adequate departure from the policies of the Obama Administration.”

The divide appears to be ideology vs. institutionalism.  Desmond Lachman, former managing director at Salomon Smith Barney tells InsideSources that “Nellie Lang was a surprisingly good and non-partisan nomination by Donald Trump. She is recognized as a highly qualified technocrat with many years of experience at the Federal Reserve.”

“My guess is that her being a technocrat without an ideological agenda is what irks the conservatives who would like to see the Fed’s wings clipped,” Lachman said.

Peter Ireland, an economics professor at Boston College and contributor to the right-leaning Manhattan Institute also believes Liang is a good pick. “Liang is exceptionally well qualified to lead our central bank. The Senate should move as quickly as possible to confirm her nomination, as well as those of [Michelle] Bowman and [Marvin] Goodfriend (my former colleague on the Shadow Open Market Committee),” Ireland wrote at the Manhattan Institute’s website.

“Some of Liang’s most recent research focuses specifically on the interplay between monetary policy and financial stability. Her insights on this topic will be particularly valuable to the Fed if it continues to adhere to the gradual approach of raising interest rates outlined by Chair Powell,” Ireland says.

And adhere she does.  It appears likely Liang will support Powell’s push for higher interest rates, as well as increased capitalization requirements for banks and an adherence to “stress tests”—all of which President Trump has specifically criticized, or goes against his broad, deregulatory approach to the economy.

“Her approach is to support heavy-handed, Dodd-Frank-style regulation,” says Kupiec, former director of the Center for Financial Research at the Federal Deposit Insurance Corp. “These regulators want to pretend they can tell you how the largest banks will perform over a three-year period during a recession. They just can’t do that.”

“The Fed can’t predict the inflation rate for the next quarter—how are they going to predict how J.P. Morgan’s going to do for three years in the worst recession of all time?”

Kupiec speculates that Liang’s nomination may be part of a grand bargain. “Maybe they agreed to bring Liang on board and in exchange they can finally get Marvin Goodfriend over the gunnel and onto the governorship. I’ve got to guess that politics is involved here somehow.”