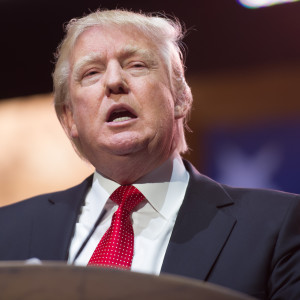 So far as we can tell, the American left has generally regarded Donald Trump’s presidential candidacy as both odious and absurd, but some liberals are praising the Republican business mogul for his comments on tax policy, including at Wednesday’s CNN debate.

Previewing his soon-to-be-released tax plan on stage at the Reagan Library, Trump promised “a major reduction for the middle class.”

“The hedge fund guys won’t like me as much as they like me right now,” he said. “I know them all, but they’ll pay more. … I know people that are making a tremendous amount of money and paying virtually no tax, and I think it’s unfair.”

According to Roll Call, those comments led progressive darling Elizabeth Warren to voice her agreement with Trump and rival Republican candidate Jeb Bush, both of whom support closing the “carried interest loophole” benefiting hedge fund and private equity managers.

“The Democrats have said the same thing,” Warren said Thursday. “We agree on this.”

Liberals in the media are also cheering. Salon’s Simon Maloy wrote, “So much of Republican and conservative economic policy is premised on the idea that the tax code is unfair to high earners, who need more money so that they can create jobs for normal people, and Trump said that way of thinking is indefensible.”

But could Trump really roll out a tax plan liberals would like? Harry Stein, who directs fiscal policy at the liberal Center for American Progress Action Fund, sounded skeptical earlier this week.

“I would not be shocked if [his plan] lacked specificity in key places,” Stein told InsideSources prior to Wednesday’s debate. That said, he acknowledged that “generally it’s a sucker’s game to make too many predictions about Donald Trump.”

Stein doesn’t have to predict what Bush’s tax policies would be, because the former Florida governor released his plan earlier this month. Stein was one of many left-leaning journalists and policy wonks frustrated with mainstream media coverage of the proposals, starting with a New York Times story declaring that Bush made “forays into populism” with his ideas. According to the Times, he “challenged some long-held tenets of conservatives” by “proposing to curtail valuable deductions that benefit businesses and the wealthy and eliminate a loophole that has benefited hedge fund and private equity managers for years.”

However, the newspaper also noted that “the effect of Mr. Bush’s proposals on the wealthy would be muted by his proposal to cut the number of individual tax brackets from seven to three, taxing income at 28 percent, 25 percent and 10 percent. Currently, the top marginal income tax rate is 39.6 percent.”

Stein said he was perplexed by the difference in tone between the Times’ piece on the plan’s “populism” and another story about the proposal published on the paper’s Upshot blog: “Jeb Bush’s Tax Plan Is a Large Tax Cut for the Wealthiest.” (That discrepancy in coverage led to an “awkward juxtaposition,” Brookings scholar Vanessa Williamson wrote, when the newspaper’s website displayed the two stories on the same page.)

“It was like they weren’t reading their own newspaper,” Stein said.

“It’s been presented very cleverly to look like it’s something very different, but it’s not,” Stein said. “Now, I’m glad he recognizes carried interest is a problem. I’m glad he recognizes we need to extend the earned-income tax credit for childless workers. But those are extremely small potatoes within his broader plan, and sometimes they’ve gotten undue weight.”

That seems to match up with the prediction of the Wall Street Journal editorial board, which praised the Bush tax plan: “Naturally, liberals will denounce the Bush plan as a tax cut for the rich, but with fewer deductions many affluent Americans will pay more. The two-term Governor also eliminates the lower tax rate for hedge-fund carried interest, not that the left will give him any credit for it.”

Stein does believe Bush and Trump may be tapping into a kind of intra-party divide among Republicans. “Cutting taxes for the rich is extremely popular with Republican elites,” he said. “It’s not as popular, when you look at the polling, with rank-and-file Republican voters.”

Republicans are also looking to avoid another presidential standard-bearer seen as protecting the interests of the affluent at the expense of middle- and lower-income Americans. In other words, they don’t want to repeat their experience with their 2012 nominee, who was attacked by President Obama for using the carried interest loophole to protect his own wealth.

“They saw Mitt Romney, who couldn’t name a single tax loophole that he wanted to close, and they’re trying to get out in front of this tax fairness issue and show they’re doing something to address it.”