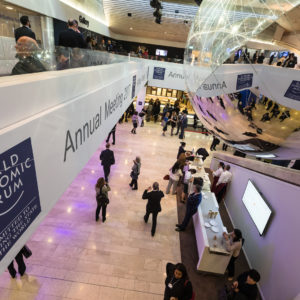 On Jan. 22-25, 2019, in Davos-Klosters, a Swiss resort, the World Economic Forum meets. It is the glitteriest of conferences. The great and the good, the rich industrialists and the glamorous public intellectuals get together to sort out where humanity is headed.

Just to be invited is a kind of credential, a sort of honorary degree, a statement that you are world-class important.

There are politicians, CEOs, so-called thought leaders and the top non-governmental organizations, environmentalists and academics.

The world’s most important international conference it is, but does it work? At some level, yes. At others, no.

It stimulates thinking, but does it change anything? Reading the news coverage year after year you are inclined to think that a lot of the participants come to rehash things they have said before or ideas that have been with them for a long time. Others are stuck in ideological dogma and try to bend the facts to fit the dogma. Think socialist; think Republican.

Yet it has no competition. It is the place to float an idea. Probably no one floats more ideas than the man who founded the forum in 1971 and serves as its executive chairman, Klaus Schwab. He is a visionary German, who holds doctorates in economics and engineering from universities in Germany and Switzerland and a Master of Public Administration from the John F. Kennedy School of Government at Harvard.

It was Schwab who, in 2016, launched the idea of the Fourth Industrial Revolution (4IR) by making it the subject of the forum that year and writing a book on it.

The 4IR is the concept that all of science and technology — from biology to nanotechnology, from quantum computing to artificial intelligence — are coming together with stunning and, at times, frightening visions of the future. A 3D printer may be making a body part while a robot is helping treat Ebola in Africa. New metals are being formulated for specific needs without human input, and farms are operating with few farmers.

In that way, with all science melding and communicating, 4IR may have consequences far beyond the previous three: first, mechanical power from water and steam; then electrical power for manufacturing; and followed by computing power and communications. Now, in the age of the Internet of Things, unity of things from artificial intelligence to advanced medicine.

Enter governments. Schwab sounds a note of warning: Will they grasp and facilitate, or will they frustrate what is happening? Will they regulate when regulation is needed? In short, will the global political class comprehend that it is in the throes of something big — bigger than it can imagine? Will it allow it to flourish while checking its Frankenstein tendencies (as with the social media companies), or will it try to subdue it or let it run to excess?

If the Davos forum has a structural weakness, it seems to me, it is that executives who are mostly middle-age and older are dealing with ideas that have been generated by young scientists, researchers and thinkers. The average age of the people in the control room for the first manned moon launch, Apollo 11, was 28. By the time NASA had become more grown-up, the average age of the control-room operators for the first space shuttle launch was 47.

Call it the sclerosis problem. I have often wondered, as civilian, large airframe design is dominated by two companies, Boeing and Airbus, whether a young engineer with a better idea would get a hearing.

It takes new companies to pursue new ideas. Those that do not grasp the speed of change fall by the way, or are just reduced in size. Half the companies of the Dow in 2000 are not there now.

The 4IR is underway here and now — it is not something in the out-years. A microcosm of 4IR is in the emergence of smart cities where telephones, computers, electricity and social welfare are fusing.

All of this raises the two great questions of our time: What is the future of work and can we save the environment in time? You will hear on these from Davos, no doubt.

A contradicting footnote to the idea that the young are the only big idea merchants: Klaus Schwab is 8o.