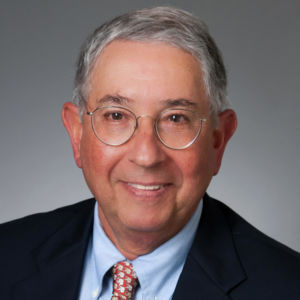 A Conversation With an Education Policy Mainstay: Fordham’s Chester Finn

InsideSources is beginning a series of interviews with leading policy professionals in the nation’s capital. We’re speaking with the leaders of think tanks, trade associations, and advocacy organizations, along with government officials, to learn more about their work and their interests outside of politics.

Today’s interview is with the Thomas B. Fordham Institute’s longtime former president, Chester “Checker” Finn. Finn has been a fixture of education policy debates in Washington for decades, including the years he served as Assistant Secretary for Research and Improvement at the United States Department of Education during President Reagan’s second term in office. Though he has officially surrendered the reigns at Fordham to Michael Petrilli, Finn is still active. He continues to write about education policy as a Distinguished Senior Fellow for the group, and as a Senior Fellow at Stanford’s Hoover Institution. He was also recently elected as the Vice President of the Maryland State Board of Education.

InsideSources recently spoke with Finn at the Washington, D.C. office he keeps at the Fordham Institute. The following interview has been edited for brevity and clarity.

InsideSources: What is your vision for America’s education system, and if you had a magic wand, what would things look like?

My vision, of course, is one in which every child is educated to the max of his or her potential, preferably in a school and university of their choice, that enables them to progress at their own speed, and master both a high quality common curriculum as well as their own special interests or career relevant learning. I think almost anybody you talk to will have a somewhat similar vision of how it ought to be, (though they might leave out the choice part). But my goodness, we are a long way from that today.

InsideSources: Obviously you’ve been active in the ed reform movement for a long time, so how would you evaluate the effectiveness of that movement over the past 30 to 40 years?

Finn: Well there is good news and there is bad news. The bad news is that by and large, the outcome measures haven’t changed much. Most of the scores are flat, especially at the end of high school and entering college. And they are pretty flat at a time that they are rising for a number of other countries. Graduation rates are up a bit, but there is a real question mark over whether some of that is “fake news”—whether it has been precipitated by credit recovery, online sorts of ersatz easy-to-pass credit recovery courses.

The good news is that a couple of very important ideas have taken hold, that in the long run are bound to make things better, at least by my lights. One is that we now judge schools by their outcomes and by their results, not by their inputs or their intentions. And that’s been a gradual painful change over the past 50 years. The other big change is that we are a whole lot closer to agreement that you don’t have to go to your neighborhood-assigned district-operated public school. That you should have other options.

InsideSources: Are you surprised that the system hasn’t responded more quickly to some of the good news you just cited?

Finn: Disappointed, I don’t know about surprised. I may be too old to surprise. First of all, keep in mind that kids grow slowly. It takes 18 years to get an 18 year-old. It takes 13 years to get somebody through school. Keep in mind that the public education system—and actually surprisingly even the private education system—is like an aircraft carrier, it doesn’t turn fast. This is not a speedboat, it’s a very ponderous thing. And keep in mind also that there are huge obstacles to learning. For example, kids really don’t spend a very large fraction of their total time in school. The formal education system has limited leverage. When a kid turns 18, if you look at what fraction of his life that he has spent in school, it turns out it’s only about nine percent. Or about 20 percent if you exclude time sleeping. Still a very small fraction of the total. The leverage of that 9 percent or 20 percent is unfortunately counteracted by the 80 percent or 91 percent. So if the rest of the kid’s life is not cooperating with what the school is trying to do, the school is going to have a hard time overcoming gaps from home or culture or peer group or you name it.

And another part of it, is that there are serious vested adult interests in keeping things pretty much the way they are. Everybody blames the teachers’ unions—and they deserve a lot blame, but they are not the only ones. Everybody from the textbook publishers to the bus drivers’ union to the school boards associations and the superintendents association and the principals association and on and on are pretty stuck in a rut and benefitting from the status quo, in terms of their own adult interests. And the adult interests always end up coming first in a system that is supposed to be serving kids.

InsideSources: What role does the Fordham Institute play in this ecosystem?

Finn: We like to call ourselves a thought-leader, and a gadfly. We try to get things on the policy agenda that might not otherwise be there. Attention for example to high-ability poor kids, which is something we’ve pushing really hard recently. We also try to do quality research on issues that are important to us, which over the years have had to do with standards and choice. Since Mike has taken over, he’s added a real interest in upward mobility. We’re also a truth squad. We try to call people out if they are getting  in the way of kids getting a good education, and we try to help concerned policymakers and advocacy groups craft sound policy whether it’s charter school accountability, or the Every Student Succeeds Act and its implementation. We occupy a niche that most people still call “center-right” in a polarizing world. We are vaguely conservative, by conventional definitions. I think we are fundamentally radical by my own definition, because we really don’t want to keep things the way they are, and an awful lot of people who want to keep things the way they are in education call themselves liberals.

Keep in mind that Fordham has two parts to it. We have a national part, and we have an on-the-ground branch in Ohio. There we are closer to an advocacy group that presses for particular changes in state policy on the one hand, and are an authorizer of charter schools on the other. We have about a dozen schools in our portfolio, and that’s a very hands-on role. We don’t run the schools, but we do decide whether they are going to continue.

So we do all those things, and we try to do it with a credibility touch on the research, clarity and earnestness on the advocacy work, and a little bit of a light touch overall—in that we try to show a sense of humor in a field that is ridiculously somber and gloomy. Mike’s a specialist in this in particular. If you listen to the podcast you’ll hear wittiness, and this is a field that doesn’t have much of that.

InsideSources: You were a former Legislative Director to the late Senator Daniel Patrick Moynihan, D-N.Y., and within a few years you were a part of the Reagan Administration. What was that transition like, and was there a corresponding shift in your political beliefs?

Finn: That’s a fair question, and if you really want to get deep into this I have a whole book of memoirs titled “Troublemaker.”

I spent about fifteen years of my life in the shadow of the late Pat Moynihan in the Nixon White House; I worked with him in India when he was an ambassador; I worked with him in the Senate. He was an extremely important mentor and influence in my life. While I was working for him, I was a, loosely speaking, what they used to call a neocon Democrat—back in the days when the Democratic Party had such things. Moynihan was one himself, Scoop Jackson was famously one, Sam Nunn, there were others. They were liberal on domestic policy but hawkish on foreign stuff, but also sort of thoughtful about what is feasible for government to do and what is beyond the reach of public policy.

And famously all of the neocon intellectuals, who I also sort of knew, like James Q. Wilson, Nathan Glazer, Norman Podhoretz, and Irving Kristol, all started as Democrats. The famous phrase about Irving Kristol was that “he was a liberal who was mugged by reality.” They began to be skeptical about Great Society promises that government is going to remake society in some better way.

So I had been a Great Society liberal in the education field, because Lyndon Johnson inspired me, and gradually became, through a variety of jobs and readings and experience and mentors, more and more wary of big schemes succeeding in making big changes quickly. But I was comfortable in that neocon Democrat world, until the Democratic Party sort of abandoned us, starting with the McGovern era. I also got to know some sensible Republicans, for example Senator Lamar Alexander, R-Tenn, who remains a friend.

So essentially, I am Independent at heart. I have voted with medium enthusiasm for Democrats and Republicans, and periodically I have switched my party registration depending on if I wanted to vote in the primary or not.

InsideSources: Outside of education policy and politics, what are your interests and what do you do in your spare time?

Finn: We have three grandchildren. The grandchildren are an important part in my life, taking them places and doing things with them. My wife and I, both, as a hobby, trying to see the world. This year we already went to the Basque region of Spain and France, and then on a small trip off the eastern tip of Russia looking at walruses and bears and things like that. We’re doing a pretty good job of working our way around the world, including a lot of pretty remote places—many of them having to do with wildlife.

I like to cook. I’m a pretty good cook. My wife doesn’t like to cook, but doesn’t mind cleaning up, so that part works out. More and more I’ve been reading history lately, and not so much fiction. Though I also read the New Yorker and food magazines, and travel magazines, and the Economist to try to get a more or less unembellished news—it’s the best written source I’ve found. But at the moment on my Kindle is a biography of Ulysses S. Grant, and I am in the middle of the Civil War. I am learning a ton about Grant’s role before he became the leader of the Union’s forces. I’m still at Vicksburg currently, and he’s having a dickens of the time taking the place—it was a lot tougher than anybody realizes.