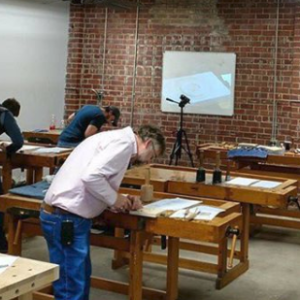 American College of the Building Arts (via Instagram)
[IS] Opinions

An awful lot of people would love to work with their hands. But there’s a problem: If you don’t go to college, preferably a four-year college, you’ll be doomed to a stigmatized existence. You are blue collar, seated all of your life below the salt.

Yet blue-collar industries across the country are facing a massive skills shortage. There are shortages of bulldozer and crane operators, carpenters, electricians, automotive mechanics, truckers and welders, among other workers.

If you want to build or fix things, you need skilled workers, artisans — men and women who work with their hands and their heads.

The popular solution, which I hear a lot about (including on “White House Chronicle,” the television show I host, where we’ve been running a series on the future of work), is that we need more apprenticeships.

The apprenticeship approach has an ancient and noble lineage, but it may not be for our time. It involves a degree of bondage to a trade. I’ve seen apprenticeships up close in a number of trades including construction, printing and newspaper production in general.

While apprenticeships work, they don’t address the social consequences of not going to college. Ergo, trade schools don’t solve the social dynamic that keeps willing hands off essential tools.

They aren’t expected to enjoy the refined things of life; they’ve chosen to travel by the low road, at least in society’s thinking. They may love the poetry of Keats and revel in grand opera, but the corner office doesn’t care. They haven’t been stamped out by a four-year college; they’re inferior.

Well, you can have both and a small college (so small you might not think it’s a college) is nurturing a big idea, a really big idea — an idea for our time. It’s the American College of the Building Arts (ACBA) in Charleston, S.C.

As Anthony Wade Razzi, chief academic officer, explained it in a letter to the Charleston Post and Courier, and in a telephone interview with me, “At ACBA, we teach six traditional trades: architectural carpentry, timber framing, architectural stone, masonry, plaster and architectural forged iron.”

But while learning their specialties for years, the students still get a traditional liberal arts education. This includes math, science, literature, philosophy, foreign language, drawing and drafting, and business management.

Razzi, who holds a doctorate in English literature from Oxford, says the college “fuses two branches of learning that have been artificially separated for 2,500 years.”

The college came out of the devastation following Hurricane Hugo in 1989. A group of civic-minded South Carolinians realized that there weren’t enough artisans to help with the rebuilding. So they founded the four-year college, which has a two-year option.

In the letter, Razzi says the students “learn to lay brick, carve stone, forge iron and frame timber” but they also learn to plan work and manage a job.

The unanticipated outcome: entrepreneurism. Many ACBA graduates have started their own businesses because they graduated with skills that allowed them to do that.

ACBA is minuscule, hardly a speck of its own stone dust on the face of education. There are just 55 students this year at the private, nonprofit college but, as Razzi says, it’s a start.

I think it’s more than a start. I think it should be a guiding light to the future of education; a curriculum for the future that addresses the urgent need for artisans, allows many to do the manual work they love, and ends the “no college” stigma. Yes, you can enjoy framing carpentry and aspire to be the president of the construction company.

There’s a way forward for society and the individual in this tiny, private venture in Charleston. Eureka!