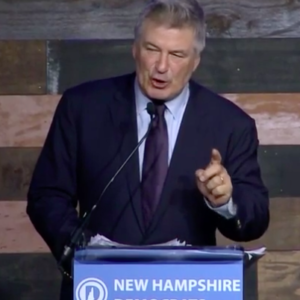 In a speech to New Hampshire Democrats that some have speculated is a first step towards a 2020 POTUS bid, actor and activist Alec Baldwin chose provocation over policy by declaring repeatedly that Democrats must “overthrow the government of Donald Trump.”

Baldwin, who spoke for less than 20 minutes to a pack audience of approximately 700 in a Manchester, NH ballroom, was careful to state clearly that the method of the “overthrow” was the ballot box. “We have a method for changing governments here in the United States,” Baldwin said. “We must in an orderly and lawful way overthrow the government of Donald Trump.” 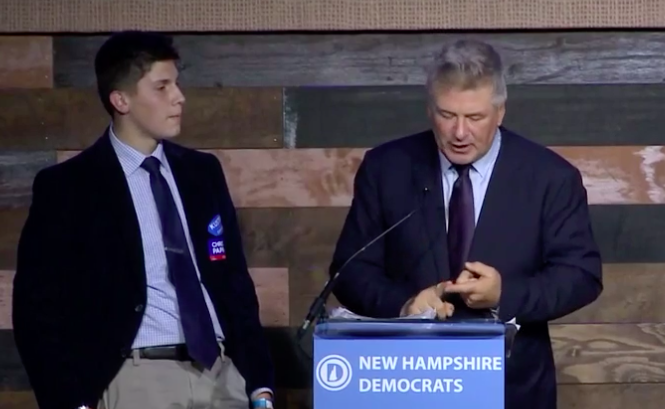 onstage during his speech at the Eleanor Roosevelt dinner in Manchester, NH

After his speech was over, Baldwin spoke with the media and re-iterated that his call for the “overthrow of the Trump government” is via the ballot box, not violence.  But coming in the wake of former First Lady Hillary Clinton’s claim that Democrats “cannot be civil” towards the GOP and former Obama administration Attorney General Eric Holder’s “When they go low–we kick ’em!” rallying cry, it’s clear that the American Left have adopted the “Avenatti” approach to the upcoming elections.

After beginning with the story of how he ended up back on Saturday Night Live in his recurring role as Donald Trump (“Lorne Michaels called in the fall of 2016–‘I only need you for three shows. Then he’ll [Trump] will be gone.’ Three. Shows.”), Baldwin kept his comments both serious and personal.  He talked repeatedly about climate change, reporting that he’d done an unofficial canvas of friends and co-workers and it was their top issue by far.  He expressed his personal concerns about the danger he says climate change presents and lashed out at what he described as the anti-science views of Republicans.

He also hit on the Democratic talking point of the influence of money in politics, claiming that a handful of wealthy, powerful people run our government. Baldwin also suggesting that money is the key driver of politics, not ideology. For example: “They [Republicans] shrug at gun violence and cash every check from the NRA, knowing they’ve earned every penny,” Baldwin said.

“Democrats may not have as many rich, power-mad billionaires pulling our strings…but those billionaires only have one vote. We have that advantage,” Baldwin said.

Republicans spent the weekend mocking the Democratic party for inviting Baldwin, who has a notorious history of making bigoted, homophobic and misogynistic comments, to speak at a dinner named for progressive icon Eleanor Roosevelt, and at the height of the #MeToo moment.  In November, 2013, liberal icon and African-American activist  wrote an article for the Atlantic entitled simply: “Yeah, Alec Baldwin Really Is A Bigot.”

NHGOP Chairman Wayne MacDonald released a statement in advance of Baldwin’s speech that said in part: “Surely, with a Democrat field as talented for 2020 as the Democrats claim, a better, less controversial, speaker could have been arranged. The new Democrat normal, exemplified by the likes of Alec Baldwin and Michael Avenatti, won’t go unnoticed by voters this November.”

Baldwin’s speech in the home of the First-In-The-Nation primary occurs the same night his new TV talk show debuts. “The Alec Baldwin Show,” will air on ABC at 10 p.m., and will feature interviews with celebrities and cultural icons. Baldwin says it won’t be all politics.

So is Alec Baldwin in New Hampshire to set the stage to play the POTUS role….for real?  Baldwin talked at length in his speech about the impact of being a dad with four children under 6 years old is having on his life, and it appears to be playing a role in his thoughts on a political career.

“My wife [Hilaria] told me she’ll divorce me if I run for office,” Baldwin said after the speech. “I’ve always wanted to do that and dreamed of doing. But I think that with my young children, that was a choice [I made].”

“But who knows what will happen in the future?  Right now I’m just trying to make some money to pay all my kids’ tuition,” Baldwin said.