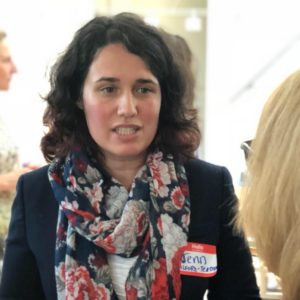 Maybe she picked up the habit from Joe Biden?

The Democratic nominee for president has earned a reputation for avoiding answer unpleasant questions, famously declaring on national TV — twice — that he would not say before the election whether he will support a proposal to pack the U.S. Supreme Court (he has since modified his position, supporting a commission to study the idea.)

In the race for state Senate District 8, Democratic candidate Jenn Alford-Teaster is also declining to answer questions — specifically candidate questionnaires from both The Keene Sentinel and Citizens Count, a nonprofit organization. Among the questions she avoided:

Do you support a broad-based income tax?

Do you support a broad-based sales tax?

Do you support stricter gun laws?

New Hampshire’s school-funding formula is once again before the N.H. Supreme Court. Whose responsibility is it to fix this problem and how?

Her opponent, two-term Republican Sen. Ruth Ward, answered both questionnaires. Some voters may not agree with her positions (she opposes taxpayer subsidies for wind and solar energy, for example), but they know what those positions are.

So does Alford-Teaser support proposals from some of her fellow Democrats, like Sen. Jeanne Dietsch, for a broad-based income tax?

“They’re lying,” Alford-Teaster told NHJournal. “I do not support an income or sales tax.”

The debate over whether the tax that funds the Democrats’ PFML is an income tax — as opposed to a payroll or wage tax — is a legitimate one. But setting that issue aside, when she filled out her Citizen’s Count questionnaire during her 2018 run, Alford-Teaster said she was “undecided” on broad-based sales taxes and taxes on earned income in New Hampshire.

And during a 2018 interview with radio host Keith Hanson, Alford-Teaster said, “We need to re-evaluate how we do the taxing in New Hampshire.”

It’s language that echoes the position of the progressive activists’ group Rights and Democracy NH, whose “People’s Platform” calls for candidates to “Work to change our current property tax system of funding schools in favor of a more equitable school funding system.”

They’ve endorsed Alford-Teaster, as has progressive icon Sen. Elizabeth Warren (D-Mass.), who Alford-Teaster backed in the 2020 POTUS primary and refers to as “our Queen.”

The Keene Sentinel endorsed Alford-Teaster despite the fact she never returned their questionnaire.

“Alford-Teaster’s campaign says they didn’t see our emailed questionnaire,” the Sentinel’s Bill Bilodeau said. “We do, in fact, know her stances on quite a few positions, though, as this is the second time she’s run for the seat and she’s spoken with reporters from our staff. So the questionnaires, while a help, are hardly our only basis for endorsements.”

In the same article, the Sentinel also endorsed Sen. Dietsch, who proposed a 6.5 percent state income tax to collect more than $300 million a year.

The outcome of the District 8 race could help determine which party controls the upper chamber next year. The Cook Political Report says the electoral fate of the state senate “leans Democrat,” while a UNH Granite State Poll released October 20 predicts a 12-12 tie.

Democrats currently hold a 14-10 majority thanks to the  2018 #BlueWave midterm elections.

The majority elected this year will control the legislative agenda for the next two years, including the decennial redistricting process. The new legislative map will re-shape political districts for the next decade, as well as the 2022 elections.

Her 2018 Citizens Count survey also shows her as “undecided” on the legalization of marijuana, sales taxes, and income taxes — but she is for New Hampshire’s participation in the Regional Greenhouse Gas Initiative, a cap-and-trade system that critics say increases energy costs.

On guns, she says that “as a gun owner, I believe that we as a society can protect both our freedom and public safety through limited gun regulation.”

In 2018, Alford-Teaster told the Valley News she would support legislation allowing municipalities to enact their own gun control measures, though, which is currently pre-empted by New Hampshire statute.

Both Senator Shaheen and former Governor Maggie Hassan won in Senate District 8 in 2014, as did President Obama in 2012, but the Republican senate candidate prevailed both years.

Alford-Teaster did not respond to follow-up questions despite repeated attempts to get a clearer picture of her positions on issues.