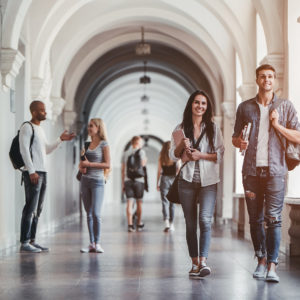 Are Liberal Arts Colleges Doomed to Be Trade Schools for Investment Bankers?

Classically-speaking, a liberal arts education is more than just something that isn’t nursing. In modern parlance it might be closer to an impractical education–though in the best possible sense. For centuries, education was divided into subjects studied for their utility, the so-called servile arts, and those studied for their own innate goodness, the liberal, or free arts. As college costs and student debt continue to climb, these distinctions are quickly fading, drowned out by worries about post-collegiate employment and the future of free speech. Does this mean that the classically understood university is dead? Not quite. At an event in Washington sponsored by Baylor University, academics discussed how best to save the university and how practical skills may play an important role.

“Today [the purpose of the university] is not only a perennial question it is an urgent question, because universities are going down the tubes,” said Robert George, director of the James Madison Program at Princeton University and a former appointee to presidential councils on bioethics and civil rights. “By that I don’t mean they are closing, though some are…. Universities are in jeopardy because they are shifting from their truth-seeking mission. They are being made into glorified trade schools… and catechisms for social justice activists.”

While there is a role for vocational and religious schools, George and others at the event stressed that this is not the role for the university. They are not supposed to be institutions of job training for investment bankers and lawyers, he says. Instead, universities should focus around the pursuit, transmission, and preservation of truth.

The western tradition of the university began in Ancient Greece with Socratic dialogues. This method of perpetually questioning, theorizing, and testing to determine a better means of understanding the world carried through to the foundation of early modern universities in Oxford, Cambridge, Paris, and other European cities in the Middle Ages. In theory, universities are open to anyone who “does business” within this structure, dealing in evidence, debate, and argument.

Today, that method is under threat, say many observers of the increasingly hostile protests against campus speakers. As headlines in 2016 and 2017 showed, universities are presently at the center of discussions about the future of the employment market, how to enter and remain a part of the middle class, as well as fundamental questions about identity.

To save liberal arts education, more and more schools, including Baylor, the University of Arizona, Princeton, and others are looking towards a richer study of western civilization and traditional liberal learning. In many instances, this requires a radical shift in the perceived purpose of an education, avoiding considering it as a means to future employments, but rather as a sort of preparation of the mind and soul.

“Our culture has extended the idea that there is no such thing as good to true and beautiful things as well,” says John Garvey, president of the Catholic University of America. This triad of goodness, truth, and beauty runs from Aristotle through much of the medieval and early modern thinking that undergirds classical liberal arts. A rebirth of liberal learning must return to it as well, Garvey says.

“Is there a way to revive a notion of liberal education that is appealing?” Garvey asks. “Yeah, let’s think about things that are beautiful and true and good. Can a non-Christian university do this? Yes.”

However, this revival may look different than universities of the past. Matthew Crawford of the Institute for Advanced Studies in Culture at the University of Virginia wrote about his experience running a motorcycle shop after having worked at a think tank in Washington. Now that the smart phone apps and the inescapable internet have filled our world with distractions, Crawford thinks that practical, manual work offers a means of escape.

“What is needed is to reclaim the real against the manipulations of manufactured experience. This happens when we engage in skilled practices that make real demands on us and bring us into face to face contact with others,” says Crawford. These experiences include cooking, or playing music or sports with other people. The key is to draw people out of their digitally atomized existences to help overcome the “mental fragmentation” of contemporary culture.

Within liberal arts education, the goal is always a higher striving, which has the potential to alter the character of the communities we live in. Believers in the worth of liberal learning point out that an understanding of liberal principles is essential for the continuation of a free society. Societies and governments arrange themselves around the pursuit of certain overarching goals or perceived “goods.” Drawing off of Aristotle, classical learning appeals to a unified good that is synonymous with truth and beauty. This broader structure creates a system in which rights can be defended, says George, who adds that a government based only on an abstract theory of rights makes it difficult to defend any of those rights. Defending these rights requires an appeal to something like the pursuit of truth.

Even as liberal universities reject a utilitarian understanding of the purpose of education, at the same time, proponents of this type of education argue that it teaches students how to think critically and to continue to learn.

“What we are offering your kids, is a liberal arts curriculum. There will always be a market for people who known how to think and known how to learn things,” says George.