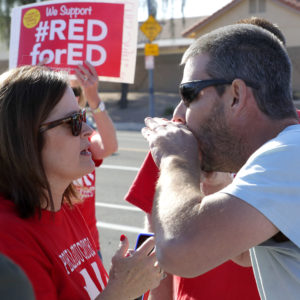 A parent of a student of Paseo Elementary shouts his protest to teacher Tammy Custis as teachers gather outside the elementary school Wednesday, April 18, 2018 in Peoria, Ariz. to vote whether to walk out of their classrooms to demand more school funding after weeks of growing protests. The man was detained and removed by local police officers. (AP Photo/Matt York)
News

Public school teachers in Arizona went on strike Thursday, demanding an immediate 20 percent pay raise and a $1 billion investment into education. The strike affected about 820,000 of the 1.1 million public and charter school students.

Gov. Doug Ducey has proposed increasing teacher pay by 20 percent by 2020, but state lawmakers have not acted on his plan. Arizona media reported that the more than 50,000 educators and supporters rallying at the Capitol building in Phoenix booed when it was announced that the state Senate had adjourned early and would not be returning until Monday. Ducey spent much of the day talking with local media, saying during an interview with radio station KFYI, “I don’t know why the leaders would say that they’re going to strike when we are delivering for the teachers on what we believe they deserve.”

Ducey’s plan to increase teacher pay would use a surplus from better-than-expected state revenues. He took to Twitter issuing a series of tweets speaking to teachers and parents, even asking them to contact their state representatives to vote on his pay-raise package.

“Without a doubt, teachers are some of the biggest difference-makers in the lives of Arizona children. They need to be respected, and rewarded, for the work they do … My number one focus right now is passing a 20% pay raise for Arizona teachers. … To parents, I understand the pain & pressure caused by today’s strike. I’m working to get this 20% raise passed. Call/email your legislator & tell them to vote ‘yes’ on a 20% pay raise for teachers,” Ducey tweeted.

The state’s Finance Advisory Committee said that revenues through March were $262 million above what was forecast. But the Joint Legislative Budget Committee warned not to spend through the surplus. Even if the state dedicates the entire surplus to education, it falls well short of the investment teachers are calling for. Since 2008, the state has cut $1.5 billion from education, according to handouts from #RedforEd, a national advocacy movement that is supporting Arizona’s teachers. There are 2,000 vacant teacher positions leaving 60,000 students without a permanent, certified teacher in the classroom.

Last week the Arizona Education Association’s members voted to strike if their demands were not met.

While the teachers were being supported by parents and others, the state’s top education official said the strike was ill-conceived.

“I don’t think this is the right way to do this,” said Superintendent of Public Instruction Diane Douglas. “I encourage teachers to be back [to school] tomorrow but I’m hearing that won’t happen.”

The Arizona Republic has been compiling a list of schools closed due to a lack of staffing. More than 100 school districts and charter districts were closed – more than 1,000 schools, including the state’s 10 largest districts. Although the state house rally was cut short Thursday due to the heat, educators said they plan to return Friday.

While the #RedforEd movement bills itself as nonpartisan, a column from Arizona Rep. Maria Syms claims that the in-state leaders are “political operatives who moved here within the last two years to use teachers and our children to carry out their socialist movement.” One of those leaders formerly worked for Sen. Bernie Sanders, Syms wrote. She also noted that #RedforEd began planning a strike the same day it endorsed a Democrat candidate for governor.

Arizona’s teachers are the fourth group of state educators to strike for higher pay and increased education funding. Previous strikes took place in West Virginia, Kentucky and Oklahoma. In Colorado, about 2,000 teachers rallied around the state Capitol in Denver, making the same demands as their colleagues have elsewhere. A larger showing is expected Friday with almost 30 districts having already announced they will close due to educator walkouts.