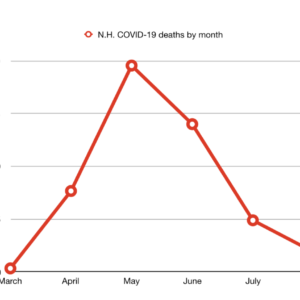 August has recorded New Hampshire’s lowest numbers of COVID-19 infections, hospitalizations and deaths since May. The dramatic, summer-long decline in all three metrics occurred as the state reopened its economy. But it has been hard to see by looking only at the daily reporting.

Media reports focused on daily snapshots or cumulative totals have masked the decline. Looking at the monthly trends shows just how sharply and quickly the state’s numbers have fallen.

As students return to school and restaurants expand indoor seating, New Hampshire has fewer than 1,000 infections for the month, fewer than two dozen hospitalizations, and fewer than 20 deaths. August saw large drops in all three categories, but especially in hospitalizations and deaths, which both fell by 90% since their peaks in April and May, respectively. The state does not break down its numbers by month, so the Josiah Bartlett Center for Public Policy created month-by-month graphs to see how infections, hospitalizations and deaths were trending over the summer.

Since May, the state has experienced a substantial decline in all three metrics.

By the end of August, New Hampshire experienced a 72% reduction in infections and a 90% reduction in both hospitalizations and deaths since their peaks in April and May. The Sununu administration has acted cautiously by lifting economic restrictions in a slow and methodical manner, which may have helped to slow the spread of the virus during the reopening period.

The numbers trend shows that no additional restrictions are warranted at this time and those remaining restrictions should be reconsidered.

It’s worth noting that as the governor began lifting economic constraints in May, many predicted a huge summer surge in infections, hospitalizations and deaths. Instead, the opposite happened.

As the economy reopened, infections, hospitalizations and deaths all fell.

As we pointed out last week, the state still has not experienced a single outbreak at a daycare center, restaurant or shopping mall. As of August 31, only six people were hospitalized with COVID-19 in the state.

That is not to say that the virus has disappeared or is not a concern for some people. Just over one fifth (21%) of infections have been traced to community transmission, according to the state, showing that there is some risk of catching it out in public.

It’s possible that Motorcycle Week changes the data or that cold weather brings a resurgence in infections and fatalities. But a realistic look at the data currently available shows cause for optimism and additional reopening measures, not pessimism and further restraints on economic and personal activity.

This article was originally published on the Josiah Bartlett Center website. It is reprinted here with permission.