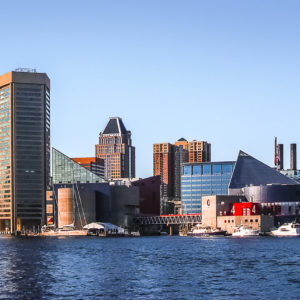 Another day, another lawsuit. On Friday morning, the city of Baltimore announced that it was filing a climate change lawsuit of its own, bringing charges against a total of 26 defendants and seeking to recover damages relating to global warming impacts.

“Once again Baltimore City is stepping up to seek relief for our citizens and our taxpayers for harm done to our infrastructure, our geography, and the quality of life. This lawsuit, which we filed this morning, is aimed to hold the fossil fuel companies accountable for the harm that has been inflicted on our community,” said Baltimore City Solicitor Andre M. Davis

Filed in state court, the lawsuit brings eight counts against the companies. Serving all of the defendants with the complaint is expected to take several weeks and potentially a few months. Davis reiterated the need to hold companies accountable for the reality of climate change, promising that the office intended to vigorously pursue the case, fighting to keep the issue in state courts.

Davis alleges that the companies knew about the harms of sustained fossil fuel use “for decades” and that they hid the likelihood of the harms from consumers and elected officials. Had the information been disclosed, the city argues, the harms of climate change could have been mitigated.

“This is something we cannot allow to go uncompensated for,” said Davis.

According to the city, Baltimore has suffered historically severe storms in the last several years. The city also has to spend thousands to maintain its water systems. The mayor alleges that the city is struggling to keep water costs for citizens down without help from the federal government.

In the announcement, the city acknowledged the dismissals in the New York and California cases. Since there has not been an appellate ruling on the case, Davis believes that Baltimore has an opportunity to take the case before the “fresh eyes” of a state judge.

“That doesn’t preclude us from going after those who are attempting to harm our communities,” said Baltimore Mayor Catherine Pugh. “The fact of the matter is that we fuel cars and buses and everything with gas and oil. That’s a reality. This lawsuit talks about the history of what some people would consider to be withholding information.”

Like the other climate change cases, Baltimore’s lawsuit is modeled after the lawsuits filed against large tobacco companies decades ago. These lawsuits, which were first planned in a meeting of climate activists in La Jolla, California in 2012, have so far been a tough sell with judges. The timing of Baltimore’s announcement, which came the day after New York City’s climate suit was thrown out, raises questions about how much taxpayers will pay for a doomed attempt at environmental regulation.

“It’s time for politicians and trial lawyers to put an end to this frivolous litigation. Taxpayer resources should not be used for baseless lawsuits that are designed to enrich trial lawyers and grab headlines for politicians,” said Lindsey de la Torre, executive director of the Manufacturers’ Accountability Project. “This abuse of our legal system does nothing to advance meaningful solutions, which manufacturers are focused on every day.”