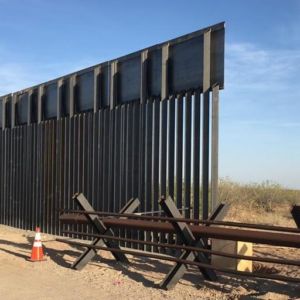 A group fighting for President Trump’s border wall is completing a 2,300-foot fence on private land in southern New Mexico, connecting it with a barrier in adjoining El Paso, Texas. Local politicians have vehemently opposed construction, in part because former presidential adviser Steve Bannon is the group’s chairman.

The group, “We Build the Wall, Inc.” — which collects donations to back the wall — will spend nearly $8 million to complete the barrier in the New Mexico city of Sunland Park in the next few days. It will be the “first ever privately built border wall on [the] US-Mexico border,” the group said at a May 30 news conference.

At another news conference later that day, Sunland Park Mayor Javier Perea said although officials originally issued a cease-and-desist order because permits were issued prematurely, the city decided to let work continue because We Built The Wall is cooperating with city officials.

The pro-wall group will still have to correct several administrative issues, the mayor said, and they could be fined if they are not completed.

“It was a highly trafficked area,” Brian Kolfage told CBS News. Kolfage, a triple-amputee Iraq War veteran, created a GoFundMe page for We Build The Wall that has raised more than $23 million for border wall construction.

“WE DID IT!!! First privately funded wall is nearly complete!” he wrote on We Build the Wall’s Facebook page.

Project leaders said they have mapped out at least 10 other spots along the border where they could build more wall.

Jeff Allen, a minority shareholder in American Eagle Brick Co., confirmed to InsideSources that the barrier was being built on his company’s property — adding he was pleased it was, “and will not apologize for it.”

Kris Kobach, a former Kansas secretary of state, who serves as the group’s counsel said the barrier was absolutely necessary.

“It really was ridiculous how easy it was to get around the El Paso wall until we built this,” Kobach told the New York Times.

Elected officials in New Mexico and Texas have criticized the fence’s construction. Rep. Veronica Escobar, an El Paso Democrat, was troubled that Bannon and Kobach were involved.

Kobach is a conservative activist who wants to be Trump’s immigration czar and has been among the most prominent supporters of the president’s hard-hitting approach to immigration and national security.

“It’s deeply disturbing when outsiders, like Kris Kobach and Steve Bannon, come in and use our community and people as a backdrop to further their racist agenda,” Escobar said in a statement.

“To act as though throwing up a small section of wall on private land does anything to effectively secure our southern border from human and drug trafficking or address the humanitarian needs of the asylum seekers and local communities receiving them — that’s nonsense,” Lujan Grisham said in a statement to the New York Times.

“Border Patrol told us it’s the No. 1 most important mile to close. The tough terrain always left it off the government list,” Bannon said. “And that’s what we focus on — private land that is not in the program and take the toughest first.”

A spokesman for the USBP said the agency was aware of the construction but had no comment as to whether Bannon’s comments were true.

“We encourage all interested vendors to compete for border barrier contracts through established mechanisms to ensure any construction is carried out under relevant federal authorities and meets USBP operational requirements for [the] border barrier,” the spokesman told InsideSources.