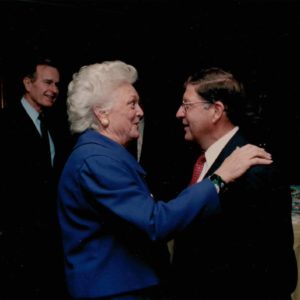 After the passing of former First Lady Barbara Bush, members of the Sununu family expressed their admiration and condolences, including former Governor–and one-time Chief of Staff to her husband– John H. Sununu.

“She was always the rock of the Bush family. She was the one that they depended on to keep things connected. She will be missed not only by her loving family but by America and the world. Nancy and I extend our sympathy and prayers to the entire family,” Sununu told WMUR’s John DiStaso. Sununu also said he’d had dinner with Barbara and George H. W. just last month.

That’s interesting because Barbara Bush was no fan of Sununu’s during his chief of staff days and pushed for his ouster from her husband’s White House in 1991.

“Legend has it” that John Sununu, after being forced to resign as White House chief of staff, had “approached the revered first lady and poured out this heart.” “Why do people take an instant dislike to me?” he wondered. And Barbara Bush, a la Dorothy Parker, zapped him with “Because, John, it saves time.”

According to the Washington Post, that joke is apocryphal, repeatedly re-used inside the Beltway.  Barbara Bush may never have said it.

Then again, from what we know of the former First Lady, maybe she did.