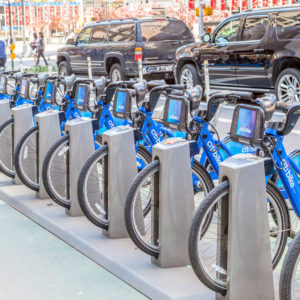 Is DC About to Become the Latest Front in the Battle for the Bikeshare Market?

Biking in the city has a certain romantic appeal. Whether it is slowly pedaling a bike with a basket of baguette alongside the Seine, or a courier zipping across Manhattan with a messenger bag, there is something delightfully urban about the idea. It seems like bikeshare programs would offer a perfect opportunity to embrace the ride without the hassle of maintaining a bike. Ride when you want, drop it off later. In practice, the systems have struggled with riders. This makes the potential entrance of Mobike, a privately-owned Chinese company, a curious potential threat to Washington’s Capital bikeshare program.

The company, which boasts a fleet of more than 5 million bikes and handles more than 25 million rides a day in China, signaled its interest in the Washington bikeshare market by posting a job opening on LinkedIn. It seems the company is looking for an operations manager in the D.C. area.

Washington has become another outpost in a battle for market dominance between two Chinese bikeshare companies: Mobike and Ofo. Both companies offer similar services and models and are racing to achieve market dominance in a surprisingly crowded market. In hopes of gaining a boost on the competition, the companies are starting to look overseas for new markets.

Instead of requiring bikes to be returned to fixed racks around the city, both Mobike and its rival, Ofo, allow users to park bikes anywhere, unlocking them later with a smartphone app. Theft is understandably a problem, but so far, the companies are popular in China, where dozens of bikeshare companies are battling to dominate the market. In the race to expand, they have started to look overseas. Mobike is already expanding into Manchester, England.

“Across the board, what we are seeing is non-economic behavior and a race for scale that is fueled by hype and enabled by easy access to money,” writes Jeffrey Towson, a private equity investor with 20 years of experience across the U.S., China, and the Middle East. “That is not unheard in hot new tech sectors, but bike-sharing just seems a particularly extreme version of this.”

In the U.S., bikeshare programs have become very trendy. By the start of 2017, more than 119 systems existed nationwide, covering all but 20 of the nation’s largest cities. Despite this surge of interest, bikeshare programs have always made questionable economic sense. The programs battle high initial start-up costs and often struggle to establish a user-base among people who both want to commute by bike and yet don’t have one of their own. Additionally, timing can be everything.

In New York City, CitiBike’s launch in 2014 was stymied by Hurricane Sandy, which damaged equipment before the system even opened, as well as historically snowy winter weather.

Washington, D.C., New York, and Chicago are the three largest systems by number of stations.

Already in 2017, Seattle’s bikeshare network became the first to close. The “Pronto” system struggled to attract riders for a variety of reasons. Riders complained that the system never reached the size it needed to succeed. Instead, when the system closed down, major transit hubs still lacked docking stations. Seattle bikers also had trouble with the city’s mandatory helmet law.

“Severely undercapitalized, hobbled by helmets, and going against best practices for network design, Pronto was doomed to disappointment at least and failure at most,” writes Zach Shaner of the Seattle Transit Blog. “For those of us broadly supportive of public biking in Seattle, the slow-moving demise was sad to watch.”

The program cost the city more than $2.2 million and never managed to attract more than 1,800 annual members, including city employees who received a significant discount.

While the Chinese companies use a different model, they will likely encounter many of the same difficulties. Additionally, industry observers point out that the growth model the company has adopted has certain inherent flaws. Many tech firms, including Uber, boosted initial users by offering subsidized services to keep prices low. The trouble is, the economies of scale work differently for a bikeshare program.

For one thing, this is not an asset-sharing company. Instead, having more users requires the company to expand its fleet of bikes. Each additional bike is a new expense that takes several months of use to pay off. As the fleet grows, maintenance expenses and losses due to theft and sabotage grow as well. Each Mobike bicycle reportedly costs $435 to produce.

Another concern is city approval. Across the country, municipal officials have been wary of allowing foreign companies to use public bike racks for a business that directly competes with public transportation. In San Francisco, another company, Bluegogo, had to alter its plans after city officials decided that they could not use city bike racks to park their bikes.

San Francisco runs a bikeshare program with 700 bikes and 70 stations.

At this point, the Washington, D.C. city government has not made any statements or policy positions relating to Mobike. All of that could change in the future, as the battle of the bikeshares gears up.