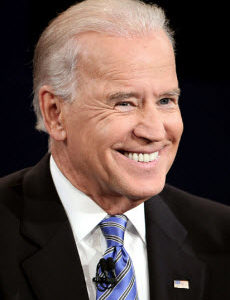 Biden Behaves Badly, but Democratic Women Still Back Him

The latest Morning Consult poll shows that not only is Biden still at the top of the 2020 Democratic primary field, but his numbers have barely moved since the recent accusations from (at least) seven women of inappropriate public touching by the former Vice President.  “His support among all Democratic primary voters dropped by one point, and increased by one point among early primary state voters – both negligible shifts within the margin of error,” Morning Consult reports.

Perhaps even more significant is Biden’s continued support among women. “Thirty-four (34) percent of Democratic women said Biden is their first choice for the party’s nomination to take on President Donald Trump next year, down one point from the previous week,” according to Morning Consult. And that 34 percent support among women is actually higher than his 32 support among Democrats overall.

The new Hill/HarrisX poll released Monday had a similar finding. Biden is leading the pack with 28 percent support across the board and 29 percent among women. That share of the women’s vote is far higher than any other Democratic candidate. In fact, Biden’s support among women is significantly higher than among Democratic men (23 percent). 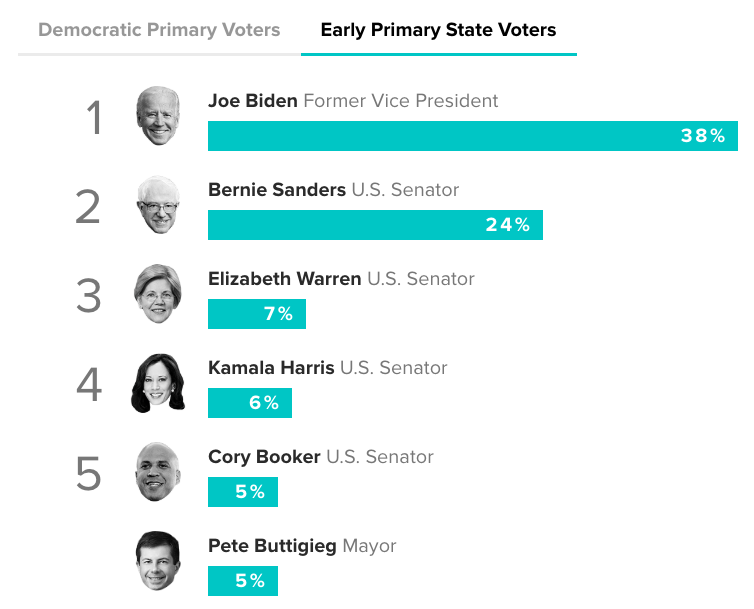 Also of note is Morning Consult’s poll of early state (IA/NH/NV/SC) primary voters, where Biden’s lead is even larger than at the national level: 38 percent vs. 32 percent. The voters who are most focused on the election and most likely to have seen or heard from the rest of the field are also more likely to support Biden.

All of this success in polls taken after extensive media coverage of complaints by Democratic women of disturbing behavior by the former Vice President, including: grabbing a woman by the neck and rubbing noses with her;  forcing a woman’s head into a forehead touch with him; and putting his hand on the thigh of a 19-year-old college student and sexual assault survivor.

Not that Biden’s behavior is going entirely unnoticed.  His “very favorable” rating among Democrats in the Morning Consult poll fell from 44 percent two weeks ago to 35 percent today.

Still, with six female candidates in the field–including well-known, high-profile politicians like Senators Kirsten Gillibrand, Kamala Harris and Elizabeth Warren–why are so many Democratic women willing to stick with Biden?

“It’s the obsessive press coverage,” says Democratic National Committeewoman Kathy Sullivan of New Hampshire. She sees the polls as a reflection of media attention, not necessarily support. “Who have the media been covering obsessively? Then they ask ‘Why aren’t the other candidates polling well?'”

Democratic strategist Lynda Tran says it’s more than just name ID and attention. It’s the strength of the Biden brand. “His brand — in particular, his decades of public service and reputation as a decent and authentic politician — is stronger than the controversy.”

“Democrats recall commiserating and empathizing with him over the family tragedies and losses, they remember the ‘bro-mance’ between him and Barack Obama, and they believe he is an honest and decent human being,” Tran told InsideSources.  “it’s not just name ID putting him over the top, it’s a sense that people already know who he is and what he is about.”

Media coverage and Biden’s brand both no doubt play a role in his ongoing strength among women voters.  But there’s another explanation that also centers on demographics: Age.  Older people are more likely to vote than young voters, and among primary voters the gap is even larger. And the AARP vote is absolutely Joe Biden’s wheelhouse.

In the Morning Consult poll, 42 percent of voters 65 and older support Biden.  Among 65-plus men in the new Harris poll, Biden has a 23-16 percent lead over his nearest competitor, Sen. Bernie Sanders. And among women over 65, he has a whopping 35 percent of the vote, 500 percent higher than Sanders and Warren—who is the top-performing woman in demographic. (Interestingly, Warren is twice as popular among older men than among older women, 13-7 percent.)

Who else have these older Democratic women overwhelmingly supported in their past? Former President Bill Clinton.