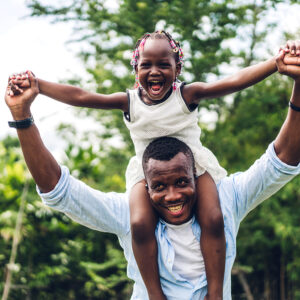 Black fathers get a bad rap.

Society has painted us with a broad brush, stereotyping us as missing in action and unresponsive to our children’s needs. At times, we’ve been labeled as uninterested in our children’s everyday lives.

Dads, we know that is far from the truth. It’s time to stand up and put the lie to these gross mischaracterizations.

Yes, deadbeat dads exist throughout the country, and it is crippling our next generation. In 1990, about 3.4 million black families in the United States were headed by single mothers. By 2020, that number had increased to 4.25 million, according to a recent article published by Statista Research Department.

But one thing I’m thankful for during this holiday season is that dads are increasingly showing up, and family dynamics appear to be turning around. Black fathers and father figures have stepped up their influence over children. The statistics have held steady since 2016.

Countless fathers have returned to once-fatherless homes. Those are real success stories. Fathers must start sharing our own success stories, to overcome society’s debilitating stereotypes and encourage others to do the same.

For decades, the ongoing narrative has never fully captured black fathers in our true essence, nor has it told of the positive impact we’ve had in our children’s growth and development over time.

Men,  don’t discredit the influence you’ve had on your children — they have success stories of their own and they can thank you for guidance and discipline.

We continue to see our children achieve success as class valedictorians, studying medicine in universities across the country, and flying military aircraft.

The truth of the matter is, when fathers or father figures are actively engaged in a child’s everyday life, it provides a sense of security, confidence and belonging.

As a father, and as the son of a single parent, my life was changed dramatically when my dad called me to reconcile our relationship. It happened three years after I confronted him about being absent from critical moments growing up. I realized that we both needed that moment of reconciliation.

There were many assumptions and unanswered questions that needed to be resolved. I am thankful that we were able to bring closure before he suddenly passed away.

The strength that I received from knowing he was proud of my accomplishments revealed why I believe fathers are the answer to a generation on the brink of being lost in this world.

Through my journey of reconciliation with my father, I realized that a father has, at minimum, three responsibilities in a child’s life: He affirms; he provides; he protects.

When my oldest daughter was born, she was completely unaware of her life’s purpose.

As her father, I affirmed her. I disciplined and set the course to build her confidence in keeping her from going astray.

Once my two younger daughters were born, I provided their needs: spiritual, emotional, physical, mental, and financial support.

Most importantly, I have since their birth, protected my daughters through prayer.

Fathers, we must admit that being in our children’s lives is a wonderful thing. As they mature and accomplish great success because of our presence, it provides us with a level of gratitude that cannot be explained with words.

God has designed for our families to be the support system we need in life and to create the balance a child needs to grow into productive and successful adults.

When a father is removed from being the leader of the family, it makes the overall success of the child more difficult.

Fathers, do whatever it takes to be engaged in your children’s lives. The reward on the other side of your pain is much greater than you could ever imagine.

Terris Todd is the program manager for Civil Society and the American Dialogue at The Heritage Foundation. He wrote this for InsideSources.com.