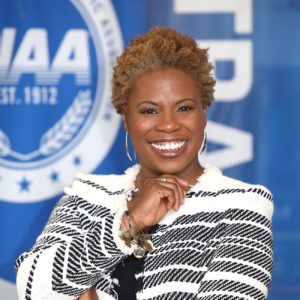 Black Student-Athletes Feel the Pressure of Their Legacies

The phrases “major college sports” and “mental wellness” are rarely mentioned in the same sentence these days. Well, that rarity recently was in the forefront during a lively and informative panel discussion at the annual Congressional Black Caucus Convention in Washington.

The panel was titled “State of the Black Student-Athlete in America.” Salient points were made about pressure and stigmatization, beginning with panelist Jacqie McWilliams, commissioner of the Central Intercollegiate Athletic Association, which features such historically black colleges as Winston-Salem State and Virginia Union.

“We call it mental wellness opposed to mental illness because the stigma of mental illness in our community means ‘you’re crazy,’’’ McWilliams said. “And that’s not necessarily true. Our job is to help these student-athletes be their best and to identify what the issues are and get them help and to educate.”

Mental illness can be a touchy subject in many sectors of the black community, as McWilliams mentioned during the panel discussion, which was sponsored by Florida Democratic congressman Al Lawson, a 6-foot-7 former basketball star at Florida A&M and former assistant coach at Florida State.

Note this observation from the Black Mental Health Alliance: “In research studies, black people have indicated that mild depression or anxiety would be viewed as ‘crazy’ in their social circles. Many of those interviewed also believe that discussions about mental illness would not be appropriate even among family.”

And there is another variable that complicates matters: digital technology.

Said Edward Scott, athletic director at Morgan State University, a historically black institution in Baltimore where he is responsible for about 300 student-athletes, “First thing I do is pray. No, I’m serious. It’s an awesome responsibility and everyone’s needs are different. What we haven’t talked about yet, the one thing that I think adds to the mental-health issues that we see with our young people, mostly 18- to 22-year-olds, is social media.”

That means peer pressure, even in college. The trolls. Abusive behavior. Those who bully and hound others often in an anonymous fashion. Especially during and after collegiate games. Heaven forbid if you have a poor performance, whether on the college circuit or in the professional platform.

Wanda Durant knows about both levels; her son is NBA superstar Kevin Durant.

Mama Durant, as she is affectionately called, said relationships with adults is crucial in the college environment. She explained, “When my sons were student-athletes and headed to college, mental wellness was not a concern of mine. I knew that my sons needed to be around men that I trusted with my sons’ maturity process and so it was vital. And so for any parents in here, when your students go off to college, it’s imperative that you develop a relationship with the adults that are going to be influences in your children’s lives.”

Stan Wilcox, executive vice president for regulatory affairs with the NCAA, took the matter a step further, saying: “It helps when individuals that are in charge look like those student-athletes who are participating in those sports. And we, over the years, fought and fought to get more and more African-American head coaches in the sports of basketball and football, back in the days when the Black Coaches Association was in existence.”

Leonard Hamilton, head basketball coach at Florida State University, chimed in eagerly, saying, “We’re charged with the responsibility of taking a youngster from a teenager to a young adult and you’re their surrogate family when they’re away from home. You have to take that position seriously. I spend more time coaching their minds and their spirits than actually I do their bodies.”

With that, imagine you are a black athlete from an impoverished background. You’re the first in your family to attend a major college. And your family’s legacy rests like a weighty burden in your hands because of that generational opportunity.

Scenarios of that type were featured in a riveting documentary produced by NBA megastar LeBron James last year. The film was named simply “Student-Athlete.”

Robert Turner was a contributor to LeBron’s documentary. Turner, who briefly played in the NFL, is an assistant professor of clinical research and leadership at the George Washington University School of Medicine and Health Sciences.

In the documentary, Turner interviews Shamar Graves, a former Rutgers University football player whose athletic career didn’t meet his expectations and he subsequently has encountered hardships in a 9-to-5 working-class world.

“In Shamar’s mind,” Turner said, “he felt that it was really important to lift his family out of poverty and to fulfill the dream that he had in his own mind. And he put a lot of pressure on himself.”

The lesson here: Not every college athlete becomes a pro star like Wanda Durant’s Kevin, a household name. There are others hidden from the media limelight with unfulfilled legacies.