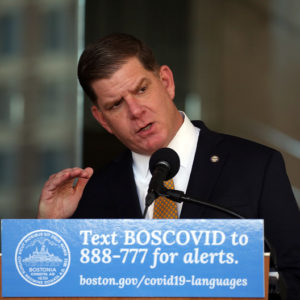 Mayor Martin Walsh provides an update on the coronavirus epidemic in the City of Boston. (Mayor’s Office Photo by John Wilcox)
News

Boston’s Mayor Says Infection Rates Are Too Low to Lift Lockdown. What Does That Mean for NH?

As Massachusetts goes, so goes New Hampshire — at least when it comes to handling the coronavirus pandemic.

Which is why the latest announcement from Boston’s mayor is such bad news for the Granite State.

“Given that we’re effectively a suburb of Boston,” Gov. Chris Sununu told NHJournal at his May 8 COVID-19 news conference, New Hampshire has little choice but to continue a widespread lockdown of the state’s economy and keep close to 200,000 Granite Staters out of work.

Proximity to Boston is also one reason Sununu gave NHJournal for being the only East Coast state between Maine and Delaware not to open any of its beaches. (Including, interestingly, beaches in Massachusetts itself.)

So, what does it mean for New Hampshire businesses and families that Boston’s Mayor Marty Walsh has announced that he’s holding off on loosening some of the restrictions on the city because the level of coronavirus infections in his city is too low.

You read that right: Too low.

A study by Massachusetts General Hospital (MGH) and the Boston Public Health Commission in four Boston neighborhoods found just 9.9 percent of those tested had antibodies indicating they’d been exposed to the virus. As a result, Walsh said, he’s holding off on lowering some of his restrictions on the city on Monday, May 18 as planned.

“We can draw two preliminary conclusions from the results of this study,” Walsh said at a news conference Friday. “First, that the actions we took early on in this pandemic made a real difference in slowing the spread and, second, that the majority of our population still have not been exposed to the virus. This underscores what we already know, that we have to move cautiously and stay focused on what got us this far.”

Walsh’s policy — we can’t lift the restrictions that kept exposure to the coronavirus so low until our exposure rates go up — isn’t merely difficult to follow from a logical standpoint. It also raises questions for New Hampshire, where the rate of exposure is likely even lower — between 5 and 7 percent, estimates Department of Health and Human Services Commissioner Lori Shibinette.

The conflict comes from a collision between two different approaches to the coronavirus problem: Suppression versus mitigation.

The purpose of an extreme policy like a lockdown is to suppress a virus — keep its spread so low for so long that it eventually dies out, or become so uncommon that minor flareups can be identified and dealt with. Under a suppression policy, low exposure rates aren’t a bug, they’re a feature.

But nobody believes COVID-19 can be suppressed.

There are at least 1.5 million people who’ve tested positive in the U.S., nearly 3,600 of them here in New Hampshire. That’s why the stated policy has been “flatten the curve:” Admit you can’t defeat the virus and find ways to live with it without overwhelming the healthcare system or public service infrastructure.

Under a mitigation strategy, higher exposure numbers but lower hospitalization and death rates are the goal. That’s why people like Dr. Anthony Fauci and Commissioner Shibinette keep saying coronavirus is “going to be with us a long time.”

Nobel Laureate Paul Romer discussed the two approaches in an interview with economist Russ Roberts on an episode of the popular EconTalk podcast released this weekend.

‘There was consensus about an emergency response, which was lockdown. That made sense amongst people who believe in, basically, what they call mitigation, which is: you accept that you cannot stop this virus from spreading through the population,” Romer said. “You try and keep it from spreading too quickly so you don’t overwhelm your hospitals But you just accept that it’s going to spread through the population and some people will die from it.

“The other strategy is suppression: that you take active measures that will keep the number of people infected to a small enough number and keep pushing that number down so that you don’t spread through the whole population.

“The disadvantage of suppression is you have to stay with it. There’s never a time when you can stop because when you stop, you go right back to exponential growth like we had in the beginning and it zooms through the whole population,” Romer said.

In other words, using a lockdown to achieve a mitigation strategy merely means you’re pushing back the day when the infection rates will rise. If Walsh lets Bostonians get back to their lives today, there will be essentially the same impact on new infections as if he’d done it a month ago, or holds off until a month from now.

Even Dr. Peter L. Slavin, MGH president, admitted on Friday that: “We know COVID-19 will be with us for a while.”

So, what was the point of a lockdown  — one that has cost the U.S. an estimated $500 billion a month in foregone output, according to Romer —  that can’t be lifted until it fails? Until the rate of exposure is high enough that there won’t be a dramatic surge in new cases due to the lack of antibodies in the population at large?

In New Hampshire, Sununu continues to give lip service to the mismatched suppression/mitigation strategy. But his decision to allow more businesses to open and — starting Monday — outdoor restaurant dining should help New Hampshire achieve what Boston hasn’t: More exposures to the virus without a significant increase in hospitalizations or fatalities.

At the same time, it raises the question: Why couldn’t New Hampshire do this one month — and 100,000 lost jobs — ago?

Answer: Because we’re “effectively a suburb of Boston.”