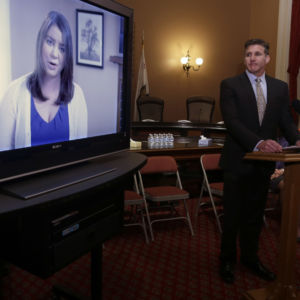 FILE - In this March 25, 2015 file photo, Dan Diaz, the husband of Brittany Maynard, watches a video of his wife, recorded 19 days before her assisted suicide death, where she says that no one should have to leave their home to legally end her life, during a news conference at the Capitol in Sacramento, Calif. Maynard, a 29-year-old San Francisco woman who had terminal brain cancer, moved to Oregon where she could legally end her life. (AP Photo/Rich Pedroncelli, File)
News

Two years ago, a terminally ill woman named Brittany Maynard became the public face of the “Death With Dignity” debate, opting to end her own life legally with prescription drugs under Oregon state law. Critics, including the Vatican, condemned her choice as suicide, but Maynard — a service-minded 29-year-old who traveled, taught and volunteered all over the world — said she wanted to avoid excruciating pain from brain cancer when her death was already imminent.

“There is not a cell in my body that is suicidal or that wants to die,” she told People Magazine before her passing. “I want to live. I wish there was a cure for my disease but there’s not.”

The story of Maynard’s death gave new life to activism across the country for “medical aid in dying” for the terminally ill, with Maynard’s husband, Dan Diaz, leading the charge. Now he’s pushing for action at the D.C. Council, where the first votes on a “Death With Dignity” bill for the nation’s capital are set for early next month.

“This legislation does not result in more people dying,” Diaz said at a city hall press conference with other advocates Thursday. “It results in fewer people suffering.”

Like Maynard, Diaz was adamant that this isn’t suicide they’re advocating — even though it fits well within the Merriam Webster definition “of taking one’s own life voluntarily and intentionally.”

His argument is that his wife clearly didn’t want to die, nor was she depressed.

D.C. Council member Mary Cheh, the Democrat who sponsored the bill, made a similar case. She likened “Death With Dignity” to following a do-not-resuscitate order or taking a patient off life support, placing the proposed policy under the broad umbrella of “respecting a person’s end-of-life-decisions.”

Under Cheh’s legislation, only individuals with at most six months to live, according to two separate physicians, would be eligible for life-ending drugs. “Hastening death is not the same thing as ending an otherwise open-ended span of life,” the Council member said.

Some advocacy groups in D.C. see it differently. No DC Suicide, for example, argues on it’s website that “it’s impossible to accurately predict a terminal diagnosis” and “patients are not required [by the bill] to receive a mental health screening for depression,” among other objections.

The legislation’s political viability is also in question. In addition to Cheh, “Death With Dignity” only has the clear support of one other lawmaker on the Committee on Health and Human Services — Democratic Council member LaRuby May. The bill would need at least one more vote to pass this panel, and progressive independent David Grosso is seen as most persuadable. Even so, the committee’s two other members — Democrats Yvette Alexander and Brianne Nadeau — are expected to oppose the measure, and its future on the broader Council is uncertain.

As for Democratic Mayor Muriel Bowser, Cheh said she was “noncommittal” about the legislation when they spoke in January of last year. Requests for comment from Bowser, Grosso and Nadeau were not returned Thursday.