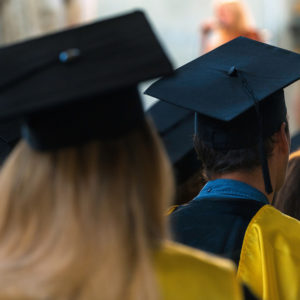 Congratulations, graduates, on your hard work over the last several years. By now, though, you’re surely feeling pressure about your next steps.

You may have debt, parents that made big sacrifices, or well-off families that expect you to live like them. You may feel pressure to take a job that promises status or mobility — and not to mention a paycheck. Harvard Business school grads, for instance, are now landing jobs with starting pay of over $160,000.

Even so, you’ll no doubt weigh ethical considerations as you make career choices. You may not want to work for a gun manufacturer or Big Pharma opioid peddler, for example.

Allow me to make one more suggestion: Don’t work for billionaires.

We’re living in a period of extreme wealth inequality. The richest 400 billionaires have nearly as much wealth as the bottom two-thirds of U.S. households combined. The lawyer and journalist Steven Brill, in his book “Tailspin,” argues that wealthy elites have become a “protected class”  by deploying the best and the brightest — people like you — to defend and multiply their assets and privileges.

So here’s a simple rule: Don’t help them.

Millions of low-wage workers running fast-food registers or stocking retail shelves have no choice about whether to work for billionaires. You do. So skip the high-end financial services companies, the hedge funds and the private equity funds. Don’t take any job in the wealth defense industry — those lawyers, accountants, lobbyists and others who get up every morning to help billionaires and corporations hide an estimated $8 trillion in trusts, shell corporations and offshore tax havens.

Skip any job that legitimates extreme wealth, like mega-philanthropies that put billionaires’ names on fancy buildings. These may do some good, but they put a gloss of virtue on questionably attained treasure.

What’s more, for every dollar a billionaire gives to charity, U.S. taxpayers chip in 37 to 57 cents in lost tax revenue. Even the best philanthropy is no substitute for an adequately funded public sector and a progressive tax system.

I’m not suggesting you become a monk. You can still make a good living without sacrificing the rest of society. There’s beautiful work to be done defending workers, protecting the commonwealth, and regenerating the earth.

You could work for a trade union or worker center. Help them research the corporations they’re bargaining with, negotiate fair contracts, and fight wage theft. Figure out ways to boost their earnings and savings.

Work for local governments or regulatory agencies to manage, defend and enlarge the public commons. Work in public schools and community colleges that need your innovative ideas to serve our children. Work for a community development corporation laboring to get control over land, housing, and employment opportunities for neighborhood residents. Bring your passion, education and social networks to the fight for an economy that works for everyone. Work on campaigns to expand green jobs, eliminate student debt, tax the wealthy, rein in CEO pay, protect workers, and reform our education funding system.

Or put that business training to work helping the next generation of employee owners expand their stake in enterprises, stabilizing jobs and spreading wealth ownership more broadly.

Finally, be mindful of the lifestyle choices you make in the years ahead.

After spending two years in the wood-paneled paradise of elite business schools, it’ll be tempting to lock yourself into an expensive lifestyle. But then you’ll have no other choice than to work for the mercenary class.

When you serve non-billionaires, you may have banging heat pipes and drafty rooms — and you may even have to take out your own trash. That’s fine — keeping your lifestyle right-sized lets you make career choices now and throughout your lifetime that reflect your values.

The rewards will be enormous. You won’t wake up 10 years from now in the office of some hedge fund that’s been sucking out your soul, like some bad version of “The Hangover.”

As the poet Mary Oliver asked, “Tell me, what is it you plan to do with your one wild and precious life?” There are many ways to serve, to deploy your gifts to the world. Don’t squander it working for the billionaires.

Chuck Collins is a senior scholar at the Institute for Policy Studies and co-editor of Inequality.org. He is co-author, with Bill Gates Sr., of “Wealth and Our Commonwealth.”