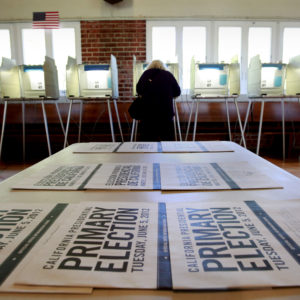 In this June 5, 2012 file photo, a voter marks her ballot while voting in the California primary in Sacramento, Calif. California lawmakers approved two similar measures, AB84 by Assemblyman Kevin Mullin, D-South San Francisco and SB568 by Sen. Ricardo Lara, D-Bell Gardens, to move the state's presidential primary from June to March to to give the state a greater role in selecting future presidents. One of the bills must pass both houses and be signed by the governor for the date to change. (AP Photo/Rich Pedroncelli,file)
News

California announced this week it will hold its 2020 presidential primary on March 3, moving up three months in a decision with the potential for an intriguing political impact.

Democratic Gov. Jerry Brown signed the Prime Time Primary Act into law on Sept. 27, designating California’s primary be held on the first Tuesday after the first Monday of March. This means California will likely follow the Iowa caucuses, New Hampshire and South Carolina primaries in the nominating schedule.

New Hampshire has held the ‘first-in-the-nation’ primary since 1920. The state passed a law in 1975 mandating a primary be held “on a Tuesday selected by the secretary of state which is seven days or more immediately preceding the date on which any other state shall hold a similar election.”

This legislative carve out ensures New Hampshire won’t lose its spot at the beginning of the primary process, though states have tried to claim its coveted status in the past. Efforts to jump over New Hampshire have failed due to legal pressure from the state or the threat of punishment from the national political party for disrupting the primary calendar.

Linda Fowler, Ph.D, is a professor of political science at Dartmouth College who focuses her studies on New Hampshire primary voters and their behavior.

In an interview with NH Journal, Fowler said the move by California doesn’t threaten New Hampshire’s first-in-the-nation status but might cause a jockeying effort by other states to move up their primaries as well. California’s move puts its primary date on ‘Super Tuesday,’ when most southern states hold their primaries. Fowler said candidates may start to direct their resources to larger states with higher delegate counts than worry about smaller states like Iowa and New Hampshire.

“This move has the potential to upend candidate strategies,” Fowler said.

Fowler said California will be “tremendously important” in the 2020 primaries due to its large population and overwhelming Democratic voter enrollment. She said even in past election cycles, Democratic candidates continued to campaign in California after failing to gain enough delegates to win the nomination. Former Sen. Hillary Clinton, D-N.Y., continued to campaign in 2008, as did Sen. Bernie Sanders, I-Vt., in 2016.

States determine their primary date through a standard legislative process concluding with a governor’s signature. According to Fowler, most states wait until after the midterm elections to finalize their primary date but said California’s decision was not unusual since prospective candidates are already making campaign stops.

California has moved its primary date six times since 1992 in an attempt to increase its influence in the voting process. Political observers have wondered why now the state decided to make a significant jump in the schedule.

Fowler said the most interesting suggestion is the move was designed to benefit Sen. Kamala Harris, D-Calif., who has been rumored as potential presidential candidate. She said the answer to that question is unclear and the more likely motivation was to ensure progressives have more influence in the nominating process in 2020. California also has the benefit of a substantially more diverse population, a criticism of Iowa and New Hampshire in recent years.

“The move for California lends more weight to Latino and African-American voters in a large, progressive state,” Fowler said.

Fowler said California has also looked at making changes to other aspects of its primary process, such as how delegates are allocated and who can vote in a party’s primary. New Hampshire holds an open primary, meaning people can vote in either the Democratic or Republican primary regardless of their party registration.

Frank Cohen, Ph.D., a political science professor at Franklin Pierce University, said in an interview with NH Journal that California’s front-loading of delegates will benefit those who have significant funds on hand to campaign in a state comprised of more than 160,000 square miles and 12 percent of the U.S. population. He said California’s move represents a desire to use its quantity as influence, which has the potential to offset the retail politics quality of the New Hampshire primary.

Cohen said diminished retail politics is not a deal-breaker for picking a president, acknowledging California’s diversity as a factor New Hampshire lacks. Though he expects this move to make an impact in the lead up to the next presidential election, Cohen said it is unlikely other large states would move its primary dates up and rather wait until its contest proves more pivotal in the nominating process.