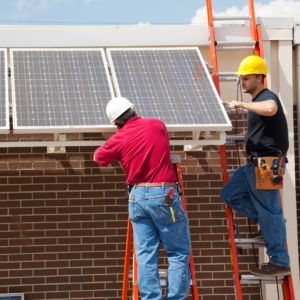 California, with its temperate weather and sunny skies, has been America’s poster child for solar energy. The bulk of the panels installed in the past year have been placed in California and the state’s government is happy to use legislation to try to push the state further into its green energy future. Unfortunately for state residents, these mandates are likely to increase the cost of living in one of America’s most expensive states. A new solar mandate is likely to dramatically increase the cost of housing in the Golden State.

In May, the California Energy Commission passed new building standards mandating that, by 2020, all new homes must have solar photovoltaic systems installed. When announcing the change, the California Energy Commission said that through the solar panel mandate, updated “thermal envelope standards,” and changes to building lighting and ventilation requirements, the state would reduce greenhouse gas emissions “by an amount equivalent to taking 115,000 fossil fuel cars off the road.”

The solar industry praised the decisions, but acknowledged that they were unlikely to save residents money in housing construction costs.

“The combination of rooftop solar and the option to add energy storage systems as an efficiency compliance credit provides builders with an attractive, cost-effective option to fully electrify homes,” said Abigail Hopper, President and CEO of the Solar Energy Industries Association.

According to the Energy Commission, the solar mandate will raise the cost of new home construction in California by about $9,500 per home. However, the commission’s analysis has been criticized since the rule was announced. Opponents say that the commission relied on an overly optimistic study, which underestimated the installation costs of new solar panels and overestimated the savings that homeowners were likely to see on their energy bills.

The Energy Commission relied on a study by the Energy and Environmental Economics Inc., which concluded that homeowners who installed solar panels would see a 100 percent return on their investment: By paying $40 more in monthly mortgage costs, they would see an $80 reduction in their monthly electric bills. That math relies on optimistic assumptions about the cost of solar panels. According to the Energy and Environmental Economics Inc. numbers, solar panels costs $2.93 a watt in 2016, a figure which will reduce by about 17 percent by 2020.

A competing study by the Lawrence Berkeley National Laboratory, however, estimated that the actual cost of the panels to be $4.50 per watt. They also estimated that panel costs fell only 1 percent between 2015 and 2016, rather than the 4 percent average decline that regulators had expected.

Critics of the solar panel mandate point out that if installation made economic sense, homeowners would do so voluntarily. It also may exacerbate differences in the state’s various housing markets. A price increase of $10,000 will likely be felt less in San Francisco (median house price $1.2 million), than in Fresno (median price $256,000).

Unfortunately, the Commission’s $9,500 price estimate also looks overly sunny. According to cost estimates by builders, full implementation of the commission’s mandates would likely increase construction costs by another $30,000. Under the commission’s new mandates, California’s housing crunch is likely to only worsen. Already, median home prices sit at nearly $540,000, a price that only about 30 percent of households can afford.

“California’s rush into renewables is premature,” they continued. “This unprecedented mandate will not reduce carbon emissions significantly because California electricity generation is powered primarily by natural gas, which produces less carbon than cars. Transportation is the largest source of greenhouse gases in California, producing more than twice as much as electricity generation.”

The two pointed out that the solar mandate may in fact work against its intended purpose, by forcing people to find cheaper housing further away from the cities where they work. The extra drive time in turn increases the amount of car emissions.

The Commission will revisit the solar mandate in 2019 before it takes effect the following year.