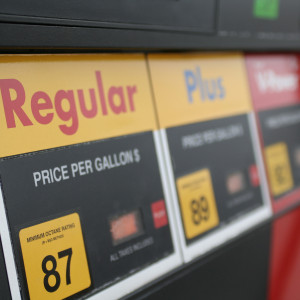 Instead, Biden touted his administration’s release of “30 million barrels from our own Strategic Petroleum Reserve. And we stand ready to do more if necessary, unified with our allies.” And he returned to a political tactic common among presidents from both sides of the aisle when gas prices rise:

An investigation of “Big Oil” and price gouging.

“When corporations don’t have to compete, their profits go up, your prices go up, and small businesses and family farmers and ranchers go under,” Biden said. “Tonight, I’m announcing a crackdown on these companies overcharging American businesses and consumers.”

It is a message echoed by his fellow Democrats, particularly those facing tough re-election races this November.

“I write today to urge you to take additional action to address rising energy costs that American families and small businesses are experiencing even as large oil and gas companies reap record profits,” Sen. Maggie Hassan (D-N.H.) wrote in a letter to FTC last week. “Big oil and gas corporations continue to increase prices for consumers at the pump while engaging in stock buybacks and fighting to keep tax breaks that force taxpayers to subsidize their record profits.”

Energy experts dismiss this as a tried-and-true political tactic, not a serious policy proposal.

“Those requests to investigate, specifically for the FTC, go back actually 100 years, and every time we have high-gas prices, some politician runs forward and says there should be an investigation about price gouging,” Frank Macchiarola with the American Petroleum Institute (API) told Inside Sources. “They never bear fruit because there’s no reality to it.”

At the urging of President George W. Bush, the FTC investigated price gouging in the wake of Hurricane Katrina, releasing a 2006 report on “Gasoline Price Manipulation and Post-Katrina Gasoline Prices.” President Barack Obama formed the “Oil and Gas Price Fraud Working Group” in 2011.

“This gas issue is serious,” Obama said after gas prices hit $4 a gallon.

The results have been the same: The number one factor on the price of gasoline is the global price of oil.

“This is a world price and the president is largely powerless to do much,” Harvard economist and Obama advisor Jason Furman told The Wall Street Journal.

Maccharola confirmed the assessment. “The reason prices are where prices are is because of the imbalance in supply and demand, the pressures that have been put on by supply chain issues, the additional pressures that have been put on by labor shortage in the United States compounded by significant disruption as a result of acts of war perpetrated by the world’s third-leading producer in oil,” Macchiarola said. “That’s why we have high oil prices.”

It is hardly a surprise U.S. energy producers believe the solution is to get more domestic oil and gas into the global marketplace. During a press call last week, API suggested specific actions it believes the Biden administration could take to get more U.S. production on line.

“The Department of Interior should schedule and complete quarterly onshore leasing sales as required under the Mineral Leasing Act with sufficient acreage and equitable time. The administration should work with the Federal Energy Regulatory Commission, the U.S. Army Corps of Engineers, and other relevant agencies to ensure National Environmental Policy Act (NEPA) and other permitting processes for oil and gas infrastructure are designed and implemented in a manner that ensures consistency, transparency, and timeliness in their application.”

In a spat with a federal judge over calculating the climate costs of new production, the White House is holding up permits for at least 18 wells on federal oil and gas leases in New Mexico and new lease sales.

Opponents of increased production point out this runs counter to one of the Biden administration’s top priorities, fighting climate change through reduced carbon emissions. And, they argue, approving a permit today will have little to no impact on how much it costs to fill up at the gas pumps tomorrow.

Schumer added people are going to hear a lot more from Democrats on these issues in the near future.

While Biden didn’t say much about climate change in the State of the Union, he is on record as saying it is not only real but is one of the greatest threats of our time.

He followed up with a series of executive actions — including blocking the Keystone XL pipeline — his first week in office. “I’m signing today an executive order to supercharge our administration’s ambitious plan to confront the existential threat of climate change,” Biden said at the time. “And it is an existential threat.”

Supporters of increased production argue that Russia’s invasion of Ukraine and its impact on global markets is still more proof America should return to energy independence. And that while the energy future will one day look very different, natural gas will play a key role in the transition.

“Populations grow, and economies expand,” said Macchiarola. “The world will continue to demand more energy, not less, and the question is whether that energy comes from the United States or hostile regimes like Russia.”

“There are a number of common-sense steps this administration should take right now to support America’s energy leadership.”

CORRECTION: An earlier version of this article referred to Arizona Sen. Mark Kelly as a Republican. He is a Democrat.