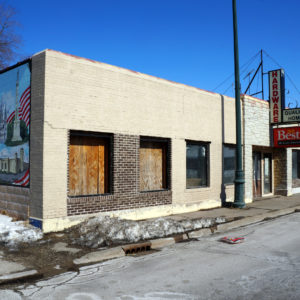 Can Tax Cuts Solve a Lack of Community?

“What shocked me is that nobody cared,” said Chris Arnade, stockbroker turned photojournalist, as he displayed a picture of a family begging by the side of the road in Ohio. “Portsmouth had gotten to a place where you could have a family, a father pushing two kids around in a dirty shopping cart and no one cared.” His shock only deepened when, wrestling with the decision of whether to alert the authorities about the kids, he asked an area addict if the parents were using and learned that this family was not the only one  in the community living this way. The sad story is only one of many that Arnade has heard since he left his work as a Wall Street investment banker to become a photojournalist documenting the lives of those that globalization and the modern economy has left behind: addicts, the working poor, and the homeless. Speaking at the American Enterprise Institute this week, Arnade challenged the policy focus that is prevalent in Washington, instead emphasizing a human openness.

Portsmouth, on the Kentucky/Ohio border, used to be a manufacturing town but lost half of its population after the factories closed. Like many of the towns he had visited, its main street has been hollowed out, filled with historic buildings and rehab clinics, but lacking energy or a sense of direction.

Arnade’s photography connects people united primarily by misfortune. They live in cities and small towns, in neighborhoods ranging from the Bronx to the Rust Belt. Given this broad span of American society, it is difficult to draw from his work any conclusion more nuanced than the recognition that many Americans continue to suffer and struggle, living lives of deep poverty.

“Today we tend to focus on white despair or rural dispair, but there has been despair in inner cities for much longer,” says Arnade, showing pictures and telling the story of a young woman he met in Hunt’s Point, a neighborhood he described as “where New York City puts all the things it doesn’t want.”

Through his photography, he highlights a cycle of rejection, isolation, and drugs that runs through communities around the country. When and how this rejection came about differs from place to place, but Arnade believes that common themes, such as a lack of education, unite them.

“The most fundemantal divide in our country–and we have a lot of divisions, wealth, race, gender,–is education,” he says. “What unifies the experience of Portsmouth and the Bronx is both of them are far far away from elite educational institutions.”

This becomes a division not just of geography but how different socioeconomic groups view the world. An atheist when he began his project, Arnade was surprised to find so many deeply religious people in communities and neighborhoods devastated by drugs and poverty. He came to recognize the value and importance of churches in these communities. In some neighborhoods, churches were the only buildings where the lights were on at night.

Can the value of self-formed community groups like churches really be measured? The importance of churches and even the community McDonalds speaks to the need to examine policy decisions on a level beyond just material prosperity.

“You can’t measure faith. You can’t put it in a spreadsheet,” he says.

More broadly, Arnade looks at policy through the lens of winners and losers, with particular focus on how badly the losers suffer. This has made him a skeptic of free trade, which he sees as having robbed many manufacturing towns of their lifeblood, resulting in failing homes, drug abuse, and hopelessness. Too often, he says, educated middle-class Americans talk down to these sort of people, rather than listening to the realities of life.

“You don’t have to do non profit work, you need to just get out and listen,” he said.

This explictly non-policy focus made Arnade an interesting guest for AEI, which devotes its work to researching the best policy solutions for various problems. At times this risks coming off as cold. Where a photojournalist can provide a photo and a story, a policy paper presents a list of numbers.

At the same time, Arnade’s work provides context for a recent AEI project reevaluating the effectiveness of America’s safety net, including the earned income tax credit (EITC), food stamps, and programs for child support and homelessness. His photographs help to explain why, in the midst of material prosperity, these programs are still necessary. Like many white papers, AEI’s project is heavy on the statistics and lacks a human face.

“A recent evaluation from the USDA estimated that participation in SNAP reduced the share of households experiencing [very low food security] by between 12 and 19 percent. Less severe [low food security] was reduced by between 6 and 17 percent,” the report found. “SNAP receipt is generally associated with increased food availability and caloric intake.”

But what do these numbers actually mean in the lives of struggling Americans? Tax credits and programs like SNAP help to ameliorate the circumstances of life but cannot address underlying cultural tensions. As America shifts towards a knowledge-based economy, people are increasingly called upon to sever ties to their home towns to move for an education and a job.

“Data doesn’t measure humiliation, hurt pride, or the loss of community or non economic forms of meaning,” says Arnade, who believes that the present framework has devalued the role of family and community. “Maybe people want one iPhone and two friends.”

At the same time, his message is perhaps a more difficult one: listen. The stories that his work highlights demonstrate that needs in the U.S. vary dramatically and also defy easy answers. To observe without attempting to explain, while difficult, acknowledges that there are limitations to what policy can accomplish.