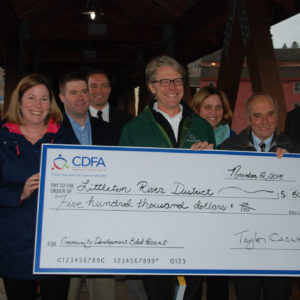 If Congress doesn’t pass a long-term budget bill by the end of the month, federal funding for state infrastructure development or affordable housing might dry up, leaving cities and towns with less money in grants to fund these projects.

The Community Development Finance Authority (CDFA), the state agency that doles out those dollars, recently said it has to pause in handing out more than $2 million in community development block grants because Congress has yet to pass a continuing resolution to fund the federal government and its programs for the next year. They have an April 28 deadline.

“Towns across New Hampshire depend on these federal funds,” said Taylor Caswell, executive director of the CDFA, in a statement. “Dozens of local municipalities across the state use these resources to bring new jobs, help treat drug addiction, build workforce housing, and revitalize downtowns, among other important community and economic development projects.”

The CDFA has awarded more than $126 million in grants to projects across the state since 2003. The YMCA in Concord recently won a $500,000 federal grant for improvements on the building that hosts its child care facility and it’s assuming it will be approved by the governor and Executive Council.

However, money for four other organizations — including a child advocacy center renovation in Laconia and affordable housing in Exeter — might not receive funds, even though they would have if the CDFA had more funds. Those projects are suspended until Washington reaches a solution.

The state usually receives about $8 million each year in community development block grants and the CDFA typically finds out in January how much it will see that year. Yet, the funding for this year is in jeopardy since Congress’ stopgap spending plan expires at the end of April and the Department of Housing and Urban Development (HUD), which administers the block grants to states, has yet to release funding figures for the year.

“When a resolution in Washington D.C. is reached and HUD provides specific allocation amounts for fiscal year 2017, and it has been determined that funding level is adequate, CDFA will move swiftly to finalize awards for the remaining four projects, as well as restart suspended application reviews,” the CDFA said in a statement. “CDFA deeply regrets this situation and is in touch with New Hampshire’s federal delegation in Washington D.C. to urge swift resolution of this matter.”

New Hampshire’s Democratic Sens. Jeanne Shaheen and Maggie Hassan have been fervent supporters of the community development block grants and since the CDFA’s announcement, they’ve been sounding the alarm in Congress, encouraging lawmakers to reaffirm their commitment to funding these grants.

They joined 40 other senators earlier this month in urging federal appropriators to include $3.3 billion in federal funding for the block grant program for the 2018 fiscal year budget.

“The CDBG program is one of the federal government’s most effective means to revitalize low- and moderate-income communities across the country,” the senators wrote in a letter. “The importance of this funding to meet the unique needs of local communities is widely recognized and we find it troubling that the President’s budget proposes to eliminate the program altogether.”

President Donald Trump’s “skinny budget” called for the elimination of the block grant program, which has been used extensively in New Hampshire, especially in the North Country for low-income, elderly, and disabled residents.

Shaheen and Hassan called Trump’s proposal to eliminate the program “misguided and harmful” at a Wednesday press conference at the CDFA headquarters in Concord.

“He talked about helping those communities that are struggling with job creation to make sure people have opportunities in the future,” Shaheen said. “Well, this is totally counterproductive to what he was talking about, and this is the budget he’s proposing.”

Hassan echoed Shaheen’s sentiments saying any changes to the program would be “devastating.”

“These cuts would be devastating for New Hampshire, and I’ll do everything in my power, along with Senator Shaheen, to make sure it never happens,” she said.