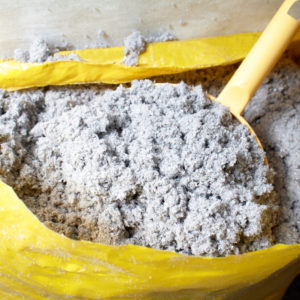 Cellulose Insulation: Energy Saver or Fire Risk? Depends on Who You Ask

Cellulose insulation is made by milling waste paper and treating it with flame retardant chemicals, generally boric acid. When installed in a building, the cellulose is either blown into the walls (a technique often used on older structures), mixed with water and sprayed into the walls.

The Cellulose Insulation Manufacturers Association promotes its product by highlighting the “substantial savings that result over time from adding insulation, based on performance [when cellulose is compared to traditional fiberglass insulation].” Meanwhile, the Department of Energy has promoted cellulose insulation manufacturers by providing grants to help their development.

Proponents of cellulose insulation claim that it can reduce energy use by 30 percent. These claims are primarily based off of a handful of studies performed more than ten years ago. Last summer, an investigation by the advertising arm of the Council of Better Business Bureaus ordered an insulation manufacturer, Applegate Insulation, to cease using these claims in its advertisements.

According to the Better Business Bureau’s National Advertising Division (NAD), the fact simply didn’t support the company’s claims that consumers would see significant drops in energy use.

“NAD found the advertiser’s evidence insufficient to support the challenged comparative performance claims…” the group wrote in its findings.

The group also criticized Applegate’s claims that cellulose insulation would provide noise reduction and that boric acid, the flame retardant used in manufacturing the insulation, was non-toxic.

The findings were a blow to many of the industry’s claims, which highlight cellulose as an environmentally-friendly construction option. The controversy over cellulose does not end there.

Not only is cellulose insulation failing to live up to its energy-friendly reputation, firefighters are finding that it is increasingly a fire risk, as well. Before being used for insulation, cellulose is treated with fire-retardant chemicals (fiberglass, the most common type of insulation, is naturally fire-retardant).

Around the country, firefighters are finding that cellulose insulation can both start and spread fires. Additionally, because cellulose burns at such a low temperature, hot spots often do not register in thermal scans, meaning that extinguishing these blazes often requires tearing down sheet-rock to thoroughly check for any lingering hot spots. One firefighting resource even advises removing cellulose insulation “another 3 to 5 feet beyond” the suspected hot spots just to be safe.

Conventional baled insulation, on the other hand, can be pulled out of the walls in sections to prevent re-ignition.

Early in January, firefighters in Chesterton, Ind., were called to an attic fire. Although the firefighters knocked down the initial blaze within fifteen minutes, “extensive overhaul proved necessary” because of the house’s construction. In order to ensure that hot spots were not lingering in the house’s cellulose insulation, firefighters were forced to pull down much of the ceiling.

In Carroll, Iowa, Fire Chief Greg Schreck credited a faulty burglar alarm with saving a small business from an attic fire that started when an overheating chimney ignited cellulose insulation on January 27, 2017.

And in early February, 2017, firefighters in East Providence, R.I., were forced to call additional units to the scene of a basement fire. Fire Chief Oscar Elmasian specifically referred to the use of cellulose insulation when describing the challenges the fire posed for his department.

“With the type of construction this is, with the blown-in cellulose insulation, we need to open up the walls all around to make sure we don’t have any hidden fire or concealed fire,” said Elmasian.

Fire chiefs around the country agree with him. At a fire in December 2015 in Biglerborough, Pa., crews were called back to the scene of a fire several hours later after a hot spot in the insulation reignited.

Deputy Fire Chief Tom Leedy credited the cellulose material with allowing the second fire to ignite. “It’s basically ground-up newspaper,” he said of the insulation. “It’s very flammable. It will hold a spark for a long time.”

However, Daniel Lea, the Executive Director of the Cellulose Insulation Manufacturers Association, pushes back on firefighters’ claims.

Although he acknowledged that cellulose insulation has been getting a lot of negative press, he pushed back on the claims that fiberglass insulation was automatically safer.

Over the past decades, cellulose insulation has seen impressive growth, however, as the price of natural gas and heating oil drops, consumers may be dissuaded from purchasing it. Meanwhile, its potential fire risk will continue to be evaluated.