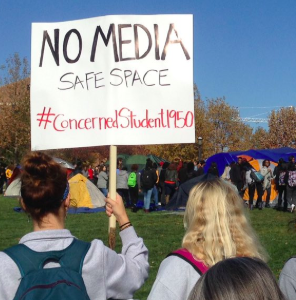 Chaos in the College Cocoon

The school newspaper at Northwestern University recently was excoriated by student activists, quite frankly … for doing its rightful job.

This written space isn’t about ridiculing hard-working, college media students; instead the issue here is about free speech, tolerance — and, unfortunately, intolerance.

Which leads us to former U.S. Attorney General Jeff Sessions. He came to town and Evanston, Ill., hasn’t been the same since.

A brief recap of events:

Some Northwestern students demonstrating against Sessions’ appearance objected to their photos being used in the school newspaper. And some were furious that their newspaper used the school’s student directory to reach out to them for comment.

Perhaps, in reality, this entire matter was really about the fact that Sessions, a staunch Republican, had the audacity to set foot on Northwestern’s campus? Sessions simultaneously extolled the virtues of free speech as hecklers in the room tried to silence him.

Suppose socialist Bernie Sanders appeared on Northwestern’s campus; what would be the reaction? Would some of Northwestern’s students object if their photos were published from a “Feel the Bern” pep rally?

And would these students scream invasion of privacy if the newspaper used the campus directory to reach out for comment regarding Bernie the Student-Debt Eradicator?

Northwestern’s top editor apologized for the paper’s reporting methods. Many veteran journalists and professionals in the real world were appalled by the editor’s bizarre — and totally unnecessary — complete capitulation to outside pressures. In fact, one posted on social media: “They are getting a bachelor’s degree in coddling.”

So, in the venerable lyrics of Marvin Gaye, “What’s Going On.”

Jason Hill, a professor of political philosophy at DePaul University in Chicago, says he knows. He says: “They aren’t allowing alternative speech at our colleges. And it’s a threat to our national security, because it’s an assault on the First Amendment.”

Before the Northwestern debacle, we saw the Crimson conundrum at Harvard. The Crimson, the name of Harvard’s student newspaper, covered an anti-ICE demonstration on campus. Crimson reporters reached out to ICE for comment to balance their story. That act ultimately became the tipping point.

Some campus activists called for a boycott of the Harvard newspaper ostensibly because they felt ICE officials shouldn’t be quoted. Even though the newspaper

story topic itself focused on Immigration and Customs Enforcement.

Some student activists appear to be conveying this message: Reporters and media should cover only issues/public figures that we (the activists) support in the relatively insular world of academic meccas in 2019.

If that doctrine were the norm in the 1930s and 1940s, then no news outlet would have dared cover Adolf Hitler, the Nazis and the blitzkrieg.

Some Northwestern activists said Sessions’ presence on campus and the subsequent protest photos were “traumatizing.”

“I’m just glad he got out safely,” Willie Huntley said. Huntley, who is black, worked under Sessions as a federal prosecutor and special assistant when Sessions was a U.S. attorney in the Southern District of Alabama and later state attorney general.

“Even when I worked with him,” said Huntley, who testified on Sessions’ behalf on Capitol Hill during the Senate confirmation hearings for the U.S. attorney general job, “I disagreed with some of his policies, but he still listened to me. I supported him then and I’ll support him in his new U.S. Senate run.”

Quite possibly, Nikki Haley, when discussing conflict resolution before 1,500 onlookers at George Washington University, may have offered a positive point when she offered, “When you are faced with a challenge, first talk about what you agree on, then, believe it or not, people will let their guard down.”

And divergent parties can find common ground from there.

Haley, former U.S. ambassador to the United Nations, appeared at GWU recently to promote her book, “With All Due Respect: Defending America With Grit and Grace.”

On the inside, with Sen. Joni Ernst, a Republican from Iowa, moderating the discussion, Haley was greeted by a rousing standing ovation and likewise for her send-off.

But on the outside on a cold night in front of the GWU auditorium, about 40 protesters explaining they represented a group called Students Against Imperialism shouted anti-Haley chants. Unlike many appearances featuring conservatives or Republicans on college campuses, these protesters didn’t disrupt or disturb the Haley-Ernst discussion inside.

For these college students, it was an outside job, as they chanted “No More War on the Poor,” “Send Haley to The Hague,”  “Nikki Loves Endless Wars,” “Hold Haley Responsible.”

One protester said, “She supported policies that have led to thousands of deaths around the world.” Another blurted, “And spreading American neo-colonialism in poor countries as a way to gain natural resources is wrong.”

In the eyes of beholders, some of this might be called shameful imperialism; but others might label it bountiful capitalism.

In these acrimonious times, one person’s up is another person’s down and black can be white and white can be black. And, of course, it’s liberal vs. conservative.

Either way, chaotic scenes of polarization on college grounds seem here to stay.