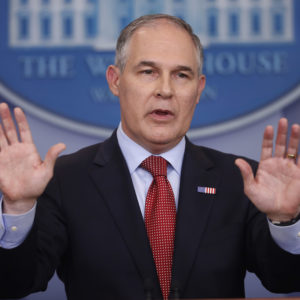 Environmental Protection Agency Administrator Scott Pruitt has been uncomfortably in the headlines this week, as critics take a sharp look at agency bonuses and his living arrangements in D.C. In 2017, Pruitt leased a room in a condo owned by Vicki Hart, the wife of a friend of Pruitt’s. Mrs. Hart works as a lobbyist in the healthcare industry. Her husband, Steven, works for a different lobbying firm on energy, transportation, and telecommunications issues. Since the story broke, Pruitt’s critics have been pointing to the apartment as a potential ethics violation since the Enbridge Line 67 pipeline, which Hart’s firm lobbied for, was approved last year.

In its reporting on the rental agreement, the New York Times led with the fact that the EPA “signed off” on a Canadian pipeline expansion project while Pruitt was renting from the Harts, citing a former government ethics official who said the arrangement “causes a reasonable person to question” the EPA’s integrity. A Bloomberg News story also described the connection between Mr. Hart and the pipeline, saying that EPA approval was necessary to bring the four-year-long permitting process to an end.

What news coverage frequently has left out is the full scope of the federal pipeline permitting process and the comparatively small role the EPA plays. Pipeline permitting is a lengthy process, requiring layers of environmental and regulatory study. The bulk of this process is overseen by the Federal Energy Regulatory Commission (FERC), which consults with stakeholders and analyzes both the potential for environmental impacts and harms, as well as methods of mitigating them.

In some instances, including Enbridge Line 67 and Keystone XL, the pipeline will cross an international border. As a result, the State Department typically “runs point” on the approval process. Insinuations that Pruitt’s involvement at the EPA played a substantial role in the approval of Enbridge Line 67 ignore the complex process which began more than five years ago.

According to publicly available documents, the initial application for the pipeline was filed with the State Department in 2012 and later amended in 2014. However, the Obama administration stalled certain approvals necessary for the project to continue, delaying the project so long that in 2014, Enbridge eventually connected the pipeline to a pre-existing line in Canada, using that pipeline to actually cross the border.

When he took office in 2017, President Donald Trump swiftly moved to announce the approval of several major pipeline projects that had been stymied by the Obama administration, including the Keystone XL pipeline and the Dakota Access Pipeline. A few months later, Enbridge Line 67 joined the list. The new presidential permit allowed the company to double the amount of oil it shipped daily.

“Line 67 currently operates under an existing Presidential Permit that was issued by the State Department in 2009 and the 2017 permit authorizes Enbridge to fully utilize its capacity across the border,” the company said in a statement at the time.

After the announcement, Enbridge began working on capacity expansion of the pipeline section that will cross the U.S.-Canadian border.

Both the EPA and Enbridge have pushed back on charges that Pruitt’s rental agreement had anything to do with the pipeline approval.

“EPA has had no approval role related to the Enbridge Line 67 Enhancement project,” an EPA spokesperson told InsideSources, explaining that the State Department had been the lead agency for the project.

Meanwhile, Enbridge released a statement clarifying Hart’s work for the company, saying that “the facts do not support the reporter’s insinuation.”

“Steven Hart, chairman of Williams and Jensen, has never been registered to lobby on behalf of Enbridge,” the statement said. “The Department of State prepared the Final Supplemental Environmental Impact Statement (SEIS) for the Line 67 Expansion Project consistent with the National Environmental Policy Act (NEPA)…The lengthy regulatory process for the Line 67 Expansion Project took more than four years and was exceptionally thorough.”

Enbridge Line 67 is a 1,000-mile long pipeline that first began construction a decade ago. It carries Alberta oil from Western Canada to Superior, Wisconsin.