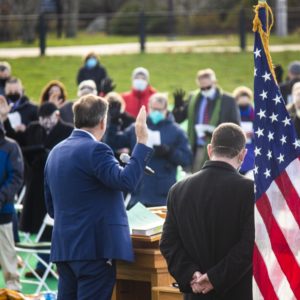 Cold Start To What’s Likely To Be Heated Legislative Session

New Hampshire’s legislators made history Wednesday, gathering both outdoors and outside the confines of Concord for Organization Day, 2020. The weather was cold, reflecting the relationship between the two parties. The surroundings were new, but many of the partisan battles were carried over from the previous biennium.

The House unanimously elected Representative Dick Hinch of Merrimack as the chamber’s Speaker. Former Speaker Shurtleff (D-Penacook), in a lone note of unity in the chamber, made the motion to unanimously elect Hinch. As expected, Hinch appointed Rep. Jason Osborne (R-Auburn) as his majority leader and Rep. Renny Cushing (D-Hampton) as Democrat leader. Cushing was elected by the Democrat caucus in November through a three-round ranked-choice vote.

Turnout was light – only 270 of the 400 elected representatives attended to take their oaths of office – but that wasn’t due to the weather. Instead, many Democrats and a handful of Republicans cited health concerns due to potential exposure to COVID-19. Democrats were angry the GOP leadership knew of members who’d contracted the coronavirus but didn’t reveal that information until Tuesday.

Speaker Hinch says the members who tested positive did not attend Wednesday’s session and quarantined as directed by public health directives.

Cushing held a press conference Wednesday morning decrying that decision, then joined scores of his party’s delegation who skipped the ‘pomp & circumstance’ of Wednesday’s ceremonies.

Representatives who declined to attend will be sworn in via videoconference on Thursday.

One unintended result from the Democrats’ decision to stay home: The GOP’s slim elected majority grew to a supermajority, a circumstance Republican members were ready to take advantage of.

The niceties ended after the House and Senate, in a joint session of the legislature, unanimously elected Bill Gardner to his twenty-third term as Secretary of State, the longest tenure of any Secretary of State in the nation.

Republicans, seizing the opportunity, amended the usual housekeeping resolution for adopting rules. Traditionally, the House will temporarily adopt the rules of the most recent biennium as a place-holder, which are then subject to amendment when the House reconvenes in early January.

Instead, Representative Andrew Prout (R-Hudson) made a motion to amend that resolution to instead adopt the rules from the previous biennium, the 2017-2018 session. The motion passed, on a standing division vote, 180 to 63. The move removed divisive Democrat rule changes that banned firearms from the House chambers, required in-person sexual harassment training, and complicated other internal House processes.

Rep. Andrew Bouldin, also a Manchester Democrat, further attempted to amend the rules to allow for remote participation in House proceedings. House Clerk Paul C. Smith, unanimously elected to another term earlier in the day, said to the body that while the Supreme Court opined that a remote session would fit the Constitution, the House would first have to adopt rules allowing for such participation, which currently do not exist.

“Let’s make this the last legislative super-spreader event,” Bouldin said in defense of his motion, which failed with only 56 votes in favor.

In an even more unprecedented move, Representative Scott Wallace (R-Danville) attempted to suspend the rules in order to pass a resolution ending the state of emergency. The motion required a two-thirds majority but fell far short, failing 95-137. Under statute, the legislature can end a governor’s state of emergency through the passage of a resolution through both the House and the Senate.

Some Republicans attempted a similar move at a House session in June. That motion only received 57 votes.

Before closing out the day and recessing until January, Representative Michael Sylvia (R-Belmont) asked the body to delay the seating of any representative that receives an electronic swearing-in ceremony.