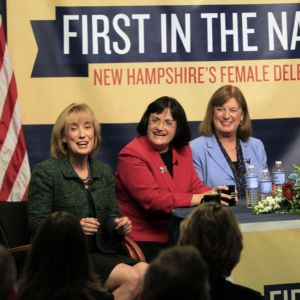 After President Donald Trump issued his immigration executive order on Friday, which put a four-month hold on allowing refugees into the United States and temporarily barred travelers from Syria and six other countries, New Hampshire’s congressional delegation was quick to respond.

But for some of the Democratic lawmakers, their statements are at odds with their previous rhetoric and voting records.

Before getting into their statements, it’s important to reiterate what Trump’s executive order entails. You can read guides from USA Today and Reuters. But here’s the quick highlights:

Since he announced his executive order, Green Card holders and permanent residents of the United States have been detained at airports, the American Civil Liberties Union filed a lawsuit against the order, and protests have erupted at airports across the country. Trump’s administration has made it clear that the immigration ban would not apply to Green Card holders.

Sen. Maggie Hassan probably has one of the most unclear records when it comes to immigration and Syrian refugees. Following the November 2015 terrorist attacks in Paris, Hassan became the first Democratic governor in the country to call for a pause in Syrian refugee resettlement.

“The governor has always made clear that we must ensure robust refugee screening to protect American citizens, and the governor believes that the federal government should halt acceptance of refugees from Syria until intelligence and defense officials can assure that the process for vetting all refugees, including those from Syria, is as strong as possible to ensure the safety of the American people,” said Hassan’s spokesman at the time.

And she never wavered from that position throughout the extremely close campaign against Republican Sen. Kelly Ayotte. Ayotte was known for being a foreign policy and immigration hawk.

But now, it seems Hassan is singing a different tune. She called Trump’s executive order “un-American” and her office said that she never supported an indefinite ban on Syrian refugees.

“Senator Hassan believes we can strengthen the vetting process for all entryways into the country while staying true to the values that make America the greatest country on earth. She never has and never will support a policy like what the President has put into place with this executive order, which is a backdoor Muslim ban and religious test that goes against American values. Senator Hassan will work with colleagues on both sides of the aisle to reverse this un-American executive order that will make America less safe,” her office said in a statement to WMUR.

“Senator Hassan strongly opposes this un-American and dangerous executive order which includes an indefinite ban on Syrian refugees, something that the Senator has never supported,” her office added. “The Senator believes that we can strengthen the process for all entryways into the country while remaining true to our values and engaged in addressing this humanitarian crisis.”

So while that statement is technically correct, since she only supported a “temporary halt” in Syrian refugees, not an indefinite ban, some people are wondering where she really stands on the issue. Was she reacting to the Paris attacks with what she thought was the best decision or was she pandering to voters on her right? It’s still unclear.

@SenatorHassan yes or no? Do you support a ban on Syrian Refugees as you previously said you did? #MuslimBan #nhpolitics #NHpolitics

Kuster called for a broad expansion of former President Barack Obama’s administration’s program to bring Syrian refugees to the United States before the Paris attacks. She joined other House Democrats in signing a letter to Obama, calling on him to increase the number of refugees to be allowed in the United States to 200,000 by the end of 2016.

But after the terrorist attacks, Kuster didn’t mention anything about bringing in more Syrian refugees. She actually voted with Republicans for a stronger vetting process.

“I am fiercely protective of our national security and believe we must be tough and smart in pursuing policies that protect Americans both at home and abroad,” she said in a statement. “As we work with our allies to defeat ISIS without endangering American lives in another civil war, we must maintain and expand rigorous screening and security checks for any Syrian refugee fleeing terrorism by seeking to enter our country.”

She joined 46 other Democrats and all of the House Republicans to pass the American Security Against Foreign Enemies Act. The bill expanded the screening process for refugees attempting to enter the United States from Iraq or Syria by requiring the Federal Bureau of Investigation to conduct its own background checks in addition to those conducted by the Department of Homeland Security.

In defense of her vote, Kuster told New Hampshire Public Radio that, “it doesn’t pause the program. It doesn’t apply a religious test. It’s a certification that the person does not pose a threat to the security of the United States.”

But Kuster is now the only member of New Hampshire’s congressional delegation that did not release a statement after Trump’s executive order was announced. Instead, she took to Twitter for a very brief statement that didn’t really say if she was for or against the ban.

America can & should be a beacon of hope around the world. Urge @realDonaldTrump to honor the values of inclusion that make us truly great.

She followed that tweet up later with another one that said, “Not as Republicans or Democrats, but as Americans, we can balance security & compassion. USA founded on freedom from religious persecution.”

Both Kuster and Hassan have brought up religion in their statements, saying they believe his executive order is a religion test as a way to ban Muslims from coming to the United States. That point is still debateable and up for interpretation. There are many media reports that have former New York Mayor Rudy Giuliani saying it is a “Muslim ban” as Trump put it.

But other articles say religion already plays a role in federal asylum and refugee law. David French from the National Review has an extensive piece on it and Politifact rated former Republican presidential candidate Jeb Bush’s claim that religion plays a role in refugee screenings as “Mostly True.” Obviously, the law leaves much room for interpretation, so expect several legal experts to weigh in on the subject in the coming weeks.

As for Sen. Jeanne Shaheen and Rep. Carol Shea-Porter, they both have been the most consistent in their language when discussing Syrian refugee resettlement and immigration.

Shaheen was supportive of allowing more Syrian refugees to come to America during Obama’s presidency and she hasn’t changed her mind after Trump’s executive order.

“We’re among those members of Congress who think that the United States can and should do more, both to try and take in more of the refugees who have been vetted, but also to support — in every way we can — the humanitarian crisis that has been created,” she said in 2015.

After Trump’s announcement, she said in a statement, “This executive order is un-American and grossly inhumane. We are a nation of immigrants and should remain welcoming to all nations and faiths, particularly those who are fleeing violence and oppression. Refugees, from Syria in particular, are fleeing unspeakable terror and hunger, and it’s unconscionable that the United States will no longer provide any of these refugees a safe haven.”

Shea-Porter said the United States should welcome Syrian refugees, but should also ensure they are properly vetted. She voted with House Democrats against a 2013 Republican amendment that would defund Obama’s executive orders on immigration.

“I think we’re very capable of absorbing a certain number of refugees who are fleeing their country for the same reasons that we would,” she said in 2015. “I think we all need to know exactly what kind of vetting is being done.”

“Our nation’s founders built this nation on dreams of a better, more tolerant society, and now we must stand together and defend and preserve those ideals,” she said. “I call on President Trump to immediately reverse his actions, and I invite all Granite Staters to join me in letting our refugee and immigrant neighbors know that we stand shoulder-to-shoulder with them as one community.”