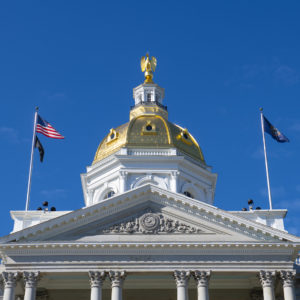 New analysis from the widely-respected Cook Political Report says the fight for control of the New Hampshire state Senate is shifting in Democrats’ favor. Cook has changed its rating of the race from a “toss up” to “leans Democrat,” part of a national shift to the left analysts believe is underway.

“Since July 22, when we last handicapped the battle to control the nation’s state legislatures, the Democrats have only continued to gain ground,” the Cook Report says. “In our July report, we shifted eight chambers, six of them GOP-held, in the Democrats’ direction. Now, in our new analysis, we’re shifting another eight chambers towards the Democrats, along with one towards the Republicans.”

New Hampshire Democrats won control of both chambers during the 2018 midterms and currently enjoy a 233-166 majority in the lower chamber and a 14-10 margin in the state Senate. Cook kept its rating for control of the New Hampshire House at “leans Democrat.”

“Granite Staters are tired of Republican attacks and lies on everything from voting rights, to health care, to taxes, and to reproductive health –– and they are ready for elected officials, at every level, who actually put their families first,” said Dario Scalco, Director of the NH Senate Democratic Caucus. “This Cook Political Report upgrade of the New Hampshire Senate from Toss-Up to Lean Democratic signals the smoke and mirrors tactics of the New Hampshire Republican Party no longer resonate. We have lots of work to do in the next ten days, and we look forward to bringing a Democratic majority back to Concord to tackle the hard issues ahead.”

Louis Jacobson, who handicaps state legislatures for the Cook Report, points to the presidential race as a key reason for the shift. “The presidential outlook has helped boost Democratic optimism in New Hampshire, where Biden’s low double-digit lead seems likely to outweigh what should be a relatively easy win for Gov. Chris Sununu,” Jacobson told NHJournal. “And it should give Democrats a slight edge in keeping both legislative chambers.”

New Hampshire Republicans concede that Trump is an issue, but they believe they’re in striking distance of taking back both chambers.

“We will win the majority and flip the House,” NHGOP House leader Rep. Dick Hinch told NHJournal. He points to a new Granite State Poll conducted by the University of New Hampshire Survey Center predicting a 207-193 GOP majority.

“We feel very confident,” said Matt Mayberry, who’s working with the NH Senate GOP to take back the chamber. “We’re competitive in every district, and I personally feel we have a chance to pick up seats in Districts 9, 12 and 24. All the candidates are working hard, but being on the ground shows the most movement in these three races.”

Republicans credit three things with boosting their odds in a Democrat-trending political environment. One is the income tax issue, which GOP operatives tell NHJournal is hitting hard. “It’s not just killing [state Senator Dan] Feltes’ campaign,” one NHGOP insider said. “It’s the number one issue our House candidates are hearing when they go door to door.”

Another is money. Both the state House and Senate campaigns have had extremely successful fundraising. The Senate PAC has raised more money than any previous year, according to Mayberry.

But the big gun is Gov. Sununu, who’s been campaigning aggressively with his fellow Republicans at both the federal and state level. Republicans see signs that his popularity — he has the highest approval rating of any political figure in either party — is spilling over to the rest of the ticket.

“Chris Sununu has been a gladiator for the Republican Party this cycle,” Mayberry said. “Fundraising, commercials, appearances — he’s doing it all.”

Still, if Joe Biden beats Donald Trump by 10 points or more, there’s little doubt the NHGOP will pay a down-ballot price. But few Granite State politicos on either side of the aisle believe Biden’s margin will be that big. The consensus is that if Trump can keep the race within four points, Republicans will be in striking distance in local races. If the margin is six points or more, however, it’s going to be a long election night for the NHGOP.