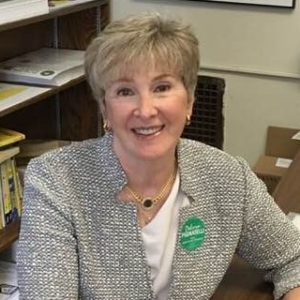 Councilor Pignatelli’s ‘And Justice for Some’ Pledge Sparks Outrage

The meeting of the Executive Council, which was held via phone due to coronavirus restrictions, began with Pignatelli reading a short prayer, then leading the council in the Pledge. But when she came to the concluding phrase, “with liberty and justice for all,” Pignatelli pointedly declared “justice for some.” (Listen to the audio below.)

Ending the Pledge with “and justice for some” is sometimes used as a strategy by progressive politicians and activists uncomfortable showing loyalty to a nation they believe is fundamentally racist. It’s similar to the approach taken by former NFL quarterback Colin Kaepernick and other athletes who refuse to stand for the national anthem.

“It’s the first time I’ve ever done that,” Pignatelli told NHJournal. “But you know, the coronavirus has pointed out the inequities in our country to me.

“We don’t treat people equally in this country, and the COVID-19 crisis has shone a bright light on those differences. I think we have a way to go and a lot of work to do until we’re a country ‘with liberty and justice for all,’” Pignatelli said.

“On the eve of Memorial Day, a holiday to celebrate and honor the fallen and injured members of the military that defended our country and our flag, Councilor Pignatelli chose to pull this disgusting stunt. She owes New Hampshire Veterans and Veterans across our nation an apology,” Clegg said.

LISTEN: Executive Councilor Debora Pignatelli leads the Pledge of Allegiance during the May 20, 2020 council meeting.

“I was not being negative toward our veterans or people who’ve died in war in any way,” Pignatelli insists. “It didn’t even occur to me that Memorial Day is coming up. I’m just so upset about this whole virus and how it’s affecting all of us.”

Pignatelli says the fact that the coronavirus is disproportionately impacting the health of people of color, the elderly and the poor is evidence of the ongoing inequality and injustice afflicting America. “That’s one of the reasons why I’m in government, to make our country a more equal place,” she said.

At the same time, Pignatelli supports a continued lockdown in response to COVID-19, despite its unequal impact on these same communities. According to Federal Reserve Chairman Jerome Powell, around 40 percent of Americans earning less than $40,000 a year lost a job in March. And the Washington Post reports, “black and Hispanic workers are bearing the brunt of the economic crisis because they are overrepresented in industries that were hit first by social distancing mandates and stay-at-home orders.”

Pignatelli acknowledged the disparate impact but said, “If I wanted to open up society so low income and minority people could go back to work, and it’s not safe, I would be criticized for that, too.”

The New Hampshire GOP called out Pignatelli for what they describe as disgraceful virtue signaling.

“Over 100,000 Veterans who have served our nation to protect ‘Liberty and Justice for All’ currently reside in New Hampshire. It is disgraceful for Councilor Pignatelli to change our nation’s pledge in order to virtue signal to her out-of-touch base,” NHGOP Chairman Steve Stepanek said in a statement. “Deb Pignatelli needs to immediately apologize for this disrespectful act to all Granite Staters. This just shows how disconnected from reality the Democrat majority in Concord is.”