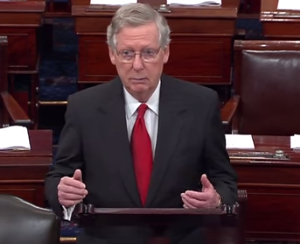 Counterpoint: This is a Recession; Republicans Need to Stop Blocking Relief

Before the pandemic, Rosaline Baptiste was working full time cleaning houses in New York. Her pay was less than a living wage, but she had a roof over her head and could send much-needed cash home to her children and elderly mother on the hurricane-ravaged island of Dominica.

Now she has work only two days a month. She lives in a shelter and can no longer help her family financially.

In Texas, Denita Jones was keeping herself and her children safe from the virus, relying on unemployment while her workplace was closed. But when her workplace opened, the help expired — and the state’s eviction moratorium ended.

None of that changed when the state’s COVID-19 infection rates skyrocketed. Now, the anxiety of having to put her children’s health at risk to put food on the table and avoid eviction is taking its toll.

Even before the pandemic, nearly 140 million people in this country were poor or low-income. Now, they’re suffering even more acutely than before. I’ve spent the last several months interviewing some of these people as they struggle to make ends meet.

According to a new survey from the Robert Woods Johnson Foundation and NPR, nearly half of all U.S. households report experiencing serious financial instability as a direct result of the current recession. Food insecurity has doubled in the United States, while fully one in three children in renter households is either food-insecure, housing-insecure, or both.

But that doesn’t mean that everyone’s suffering.

America’s billionaires, my colleagues at the Institute for Policy Studies have found, have collectively seen their wealth increase by nearly $850 billion, or 29 percent, since the pandemic started. For the wealthiest among them — Jeff Bezos, Bill Gates, Mark Zuckerberg, Warren Buffett and Elon Musk — the increase is closer to 60 percent.

We are living through what economists call a “K-shaped recovery.” That is, the recovery line for the wealthy is on its way up while the line for everyone else continues to crash downward.

In truth, this process was underway well before the first case of COVID-19 was detected.

In 2017, President Trump and the GOP passed a trillion-dollar tax cut for the wealthy, exploding the deficit and putting a strain on social programs for those already struggling to get by. Most billionaires now pay lower tax rates than working-class Americans, and over half of the stock market is now owned by the top 1 percent of earners.

Throw in a recession where the lowest-paid workers were the most likely to see their livelihoods vanish and you get an astonishing acceleration of inequality.

If you want to get a sense of how lopsided things were even before that point, consider this: In the early months of the pandemic, the official poverty rate — widely seen as an undercount of how many people are actually struggling — actually ticked down.

How could that be possible? Because the March federal relief package issued those $1,200 payments and boosted unemployment benefits. With this emergency aid, many desperately poor families were briefly better off than they were before.

But it didn’t last. Extended and enhanced unemployment benefits lapsed, a federal eviction moratorium ended, and there’s been no more direct cash aid even as the pandemic has ground on. The Democratic-controlled House of Representatives passed another desperately needed relief bill back in May, but the White House and GOP-controlled Senate have taken no action on it.

More recently, just after Federal Reserve Chief Jerome Powell gave a stern warning that the economy desperately needs a robust relief package, Trump abruptly and inexplicably ordered all negotiations with the Democrats on relief to end.

After the stock market took a nosedive on that news, Trump erratically tweeted that a stand-alone check should be sent to voters. But the damage is done, and a simple relief check is but a bandage on a hemorrhaging wound.

For all but the wealthiest Americans, this recession is far from over. If we as a country prioritize evidence-based virus safety measures, we won’t just wear a mask and practice social distancing. We’ll pass a robust relief package that helps those who need it most, so we can weather the storm and end the recession for all of us.