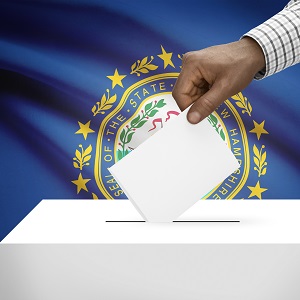 Granite Staters voted on Tuesday, supporting Democratic candidates in closely-watched races and deciding the fate of Keno in the state’s biggest cities.

Below are a few takeaways from Election Day in New Hampshire and what it means going into 2018.

Gatsas, who had served as mayor since 2010, conceded the election and congratulated Craig on her victory at 7:40 p.m.

In 2015, Gatsas won a tight race, defeating Craig by 64 total votes. In the non-partisan municipal primary in September, however, Craig finished in first place ahead of Gatsas. Craig won by a final result of 12,053 to 10,554 votes.

Ray Buckley, New Hampshire Democratic Party Chairman, issued a press release in which he said, “There is no better person to make the most of our incredible potential, tackle our challenges head-on and lead this city to new heights.”

While Ted Gatsas did not win a fourth reelection in the Queen City, incumbent mayors around the state enjoyed a more favorable Election Day.

Bouley won by a comfortable margin, as did fellow incumbent mayors including Caroline McCarley in Rochester, Karen Weston in Dover, and Kendall Lane in Keene.

Two special elections were suited as tests to see whether the Republican Party could stem its series of defeats in the General Court.

So far in 2017, Republicans have lost eight of 10 special elections, including seven of nine in the General Court.

Ultimately, the Democrats took seats on the ballot in Hillsborough District 15 as well as Sullivan District 1.

The Hillsborough seat became vacant in March after the sudden passing of Republican Rep. Steve Vallaincourt. Democratic nominee Erika Connors defeated Republican Albert MacArthur Jr. to serve out the remainder of Vaillancourt’s term before running for a full two-year term next fall.

Democratic Rep. Andrew Schmidt resigned the seat on June 22 after he announced his move to New London.

In the special election for the vacant seat in Sullivan District 1, Democratic nominee Brian Sullivan defeated Republican Margaret Drye, and will serve out the remainder of Schmidt’s term before running for a full two-year term next fall.

Sullivan enjoyed an advantage with a predominantly Democratic voter base but also rallied an equally high percentage of independents to secure his victory.

Seven cities in the Granite State held referendums on Tuesday to decide if their municipalities will allow restaurants and bars to utilize Keno, a newly authorized gambling game.

Three cities passed the measure: Manchester, Laconia, and Nashua, while four cities voted it down, including Concord, Keene, Dover, and Rochester. Officials in Rochester are already anticipating a recount on the final results due to the measure failing by seven votes.

While the cities voted on Keno on Tuesday, most towns in New Hampshire will vote on the gambling game in the spring. The split vote represents an early divide on the proposed revenue generator counterbalanced by concerns of expanding gambling options in the Granite State.

Last year, Keno brought in $900 million in tax revenue for Massachusetts. The game would be regulated by the New Hampshire Lottery, with the tax revenues going to the Education Trust Fund.

Deputy Director of New Hampshire Lottery Lynda Plante told NH Journal in a phone interview in September the agency is anticipating Keno operations in 250 locations across the state while generating an estimated $43 million in total sales revenue. The Education Trust Fund, which will finance the proposed full-day kindergarten program, is projected to receive an estimated $8 million.