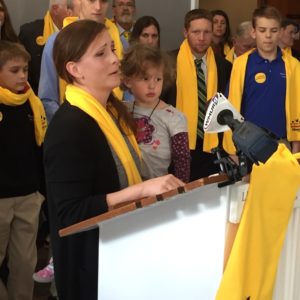 Catie McLaughlin, who homeschools her five children in Hampton Falls, NH, speaks on behalf of SB 193 at a state house event.
News

Supporters of Gov. Chris Sununu’s  “Education Savings Account” plan are schooling  their opponents on math, and the numbers aren’t pretty.

Opponents of SB 193 say letting struggling, low-income students use publicly-funded scholarships to attend private schools would hurt local budgets.  Schools have fixed costs, they argue, and losing per-student revenue makes it harder to serve the remaining students. They point to a report from the Legislative Budget Assistant projecting a cost of nearly $100 million over 11 years.

“I voted in favor of choice in the past, but I cannot support this bill for one primary reason,” said House Finance Committee chairman Neal Kurk (R-Weare) when he joined all 11 Democrats on the committee to vote against it last month.  “This bill downshifts $99 million to local property taxpayers in ways they will not be able to avoid by reducing expenses.”

But at a state house press conference on Tuesday, school-choice supporters put that $100 million number into perspective: Total public school spending over that same period is projected to be more than $26 billion. With a “B.”

“The Legislative Budget Assistant’s fiscal analysis projected a $99.43 million cost over 11 years and people are freaking out,” Andrew Cline of the Josiah Bartlett Center for Public Policy told NHJournal.  “So we did the math: That figure represents 0.37 percent of projected public school spending over the same time frame. It’s a tiny fraction of public school spending that would be spent on, at most, a few thousand kids a year statewide.”

And that 0.37 percent would go to a very narrow set of students: Low-income, public school students and children in poor performing schools.

As for complaints that these scholarships would hurt the finances of existing public schools, Cordelli points out that the amended version of the bill includes caps on the number of students who can participate “We’re talking about 500 students statewide,” Cordelli said. “I support public schools, my daughter’s a teacher. I’m not going to support anything that hurts our public schools.”

Cordelli predicts a win in Wednesday’s House vote, despite the bill receiving a negative vote from the House Finance Committee.  Cline is more circumspect:

Listen to NHJournal’s podcast with Drew Cline of the Josiah Bartlett Center for Public Policy here.