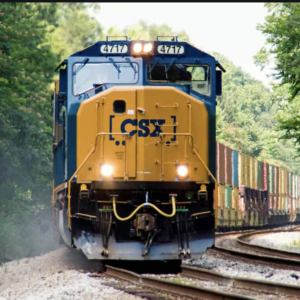 While Washington debates a trillion-dollar infrastructure bill to upgrade roads and rail, one of the biggest private-sector players in the business is pushing ahead with its own plan to expand and improve rail access in the Northeast.

On Friday,  CSX Corp. announced it has submitted an amended and supplemented application to the Surface Transportation Board (STB) as part of the previously announced deal to acquire New England’s Pan Am Railway’s Inc. (Pan Am).

“The proposed transaction is an ‘end-to-end’ acquisition that will integrate the New England rail network owned by Pan Am into CSX’s national rail network, creating seamless single-line service,” James M. Foote, president and chief executive officer of CSX, said in a statement. “This will provide substantial benefits to shippers with low-cost, environmentally-friendly rail service with truck-like reliability.”

The CSX-Pan Am deal would have a significant impact in northern New England, bringing Class I rail service to shipping centers like Portland, Maine and Portsmouth, N.H., making them more competitive. CSX, which spent nearly $1.4 billion in private dollars in 2020 to update its infrastructure, plans to also invest to improve the Pan Am infrastructure. Part of that investment, during the next five years, will help CSX upgrade many of the Pan Am’s 10-mph main line track miles to 25-mph standards.

Based in North Billerica, Mass., Pan Am owns and operates about 1,200 miles of rail and also owns a partial interest in the more than 600-mile Pan Am Southern system. It was founded by Timothy Mellon, grandson of Andrew W. Mellon and an heir to the Mellon banking fortune, and David Fink.

“Pan Am remains excited about this merger with CSX, a North American leader in rail-based freight transportation,” Fink said Friday. “We have continued to receive support from our customers about the transaction as they know that CSX’s investment in the region will benefit not only New England shippers but also those who will have new access to their goods and products through the direct connection into CSX’s national rail network.”

CSX already operates a network spanning 23 states. They say the merger would expand rail service in the Northeast and provide much-needed benefits to the region making the rail network generally more efficient and safer for operations, communities, and passenger rail.

“CSX’s operating model will benefit passenger and commuter carriers in New England as well as shippers as the company commits to maintaining or improving existing passenger service that operates on Pan Am,” the company said in a statement. “CSX has a long-standing history of working cooperatively with Amtrak and other passenger rail partners as evidenced by the significant improvement in contractual on-time performance with Amtrak since CSX has implemented its new operating model.”

Amtrak CEO Bill Flynn, however, hasn’t been a fan of the Pan Am-CSX merger.

“As currently proposed, the acquisition of Pan Am by CSX represents a significant threat to the American traveling public which relies on Amtrak and our state partners to deliver frequent, reliable, and sustainable intercity passenger rail service,” Flynn said last month. The “Amtrak Connects US” proposal released in March aims to provide new rail service to over 160 more communities and 20 million more passengers annually by 2035.

“This aligns with the Biden administration’s infrastructure investment blueprint,” said Flynn. “And any merger’s impacts on this goal should be considered by the Surface Transportation Board during its review.”

Invoking the president may be an intentional effort to get the attention of the White House, as President Joe Biden is a big Amtrak booster.

“When I became vice president, one of the Capitol Hill newspapers estimated that I had taken more than 7,000 round trips on Amtrak over my career,” Biden said at an April event marking Amtrak’s 50th anniversary. “Amtrak became my family, and I used to have a Christmas party for Amtrak employees at my home, and it got so big we ended up having a summer party because family and retirees kept coming back.”

But despite an estimated $100 billion in subsidies, Amtrak has struggled to provide quality service and control costs.

“Amtrak takes a lot of money for routes that are losing lots of money,” David Williams, president of Taxpayers Protection Alliance tells Inside Sources.

Steven Rattner, who served as counselor to the  Treasury secretary in the Obama administration put the finances of Amtrak into perspective in a recent column in the New York Times, writing “The government-owned corporation, which operates in 46 of our 50 states, lost $475 million on its long-distance trains in the fiscal year ending Sept. 30, 2019.”

On Thursday, both the Maine Department of Transportation and the Northern New England Passenger Rail Authority expressed optimism about the revised application and what it could mean for the region. Nate Moulton, director of freight and passenger services for the Maine Department of Transportation told Mainebiz that the state remains: “… supportive of the transaction. We are still confident it will happen, and we think it’s good for Maine.”

In addition, CSX pledges to “operate Pan Am with a smaller, more reliable and more fuel-efficient fleet, significantly reducing fuel consumption and improving rail’s environmental footprint in the region.”

A Class I railroad like CSX moves a ton of freight 508 miles on a single gallon of fuel on average, which is 3-4 times more fuel-efficient than carrying cargo by truck.

The merger has the backing of local political leaders like Sen. Susan Collins (R-Maine) and Gov. Chris Sununu (R-N.H.)

“The transaction contemplated between CSX and Pan Am has the potential to bring significant benefits to Maine. Many Maine businesses rely on rail traffic to deliver raw materials and transport products,” Collins said.