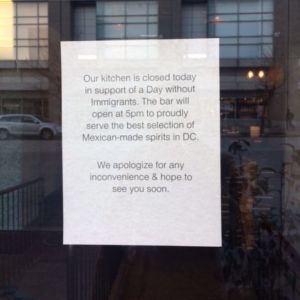 Did the Day Without Immigrants Protest Hurt Workers?

On Thursday, February 16, protesters hoped to make the classic Washington, D.C. power lunch harder to find. The Day Without Immigrants protest was yet another show of solidarity against President Donald Trump’s travel ban and statements against illegal immigration. The New York Times wrote that the protest would “hit Washington in the stomach,” rather literally. Dozens of restaurants closed their doors in a show of solidarity. The protest aimed to show how much American industry relies on immigrant labor. Ironically, the protest seems likely to hurt workers, many of whom likely lost wages because of the closures.

In Washington, several prominent immigrant-owned restaurant chains announced that they would be closing in support of the Day Without Immigrants protest. Popular D.C. chef and restaurateur José Andrés, a Spanish immigrant, announced on Twitter that all five of his area restaurants would be closed. So did Iraqi-born Andy Shallal, who owns Busboys and Poets, a chain of six restaurants in the Washington area. Both men have been vocal critics of Trump since early in his campaign.

Shallal and Andres were joined by dozens of other area restaurants. Many of them are immigrant-owned, while others closed as a show of solidarity.

Salad chain Sweetgreen closed its 18 D.C. locations. Locations in other cities remained open, however. When contacted for comment, the chain replied with a form email explaining that corporate employees are “participating in our annual IMPACT retreat in Washington D.C.”

However, Sweetgreen told InsideSources that its employees would be compensated for missed hours on Thursday. The chain also said that shifts would be provided in other stores for those who wanted to work.

Several other restaurants offered limited service. Some such as pizza shop AllPurposeDC, closed for lunch, but opened in time for dinner. Others closed their kitchens, while keeping the bar open. Both options allowed the restaurant to show solidarity without losing a full day’s revenue.

The Day Without Immigrants protest included many popular D.C. restaurants, but patchy participation means that it is unlikely to have the impact organizers hoped. After all, there are more than 2,000 restaurants in Washington. Fast food restaurants such as Five Guys, McDonald’s, and Shake Shack remained open. For Washingtonians looking for healthier options, salad bar Sweetgreen opted to close, while competitor Chop’t remained open.

What does closure cost restaurant workers? Will the protest hurt the very people it is supposed to support? The effects of the boycott will vary from restaurant to restaurant. Busboys and Poets allowed workers to use their paid leave on Thursday or come in to clean and organize the restaurants or office.

Few of the other restaurants mentioned how closures would affect their workforce. Ramen shop Toki Underground said only that, “We will be closed all day on Thursday in solidarity with our staff.”

For all of the restaurants that closed, many more decided to remain open. This may dilute the message of the protest, showing that immigrants play an important role in food service but are far from the only employees.

Although it is a common argument that immigrants do jobs that Americans don’t want, the reality is more complicated. Immigrants only account for about one in six American workers. While they are more likely to work in the service, hospitality, and construction industries, they are not a majority of the workers in any of these fields.

The Day Without Immigrants protest hoped to show the importance of immigration by giving Americans a taste of what their day would look like if immigrants stayed home. Instead, the protest demonstrated the vibrancy of the American economy. Instead of relying solely on a single demographic of workers, businesses employ immigrants and native-born Americans of all ages to chop vegetables, wait tables, and put lunch on the table.