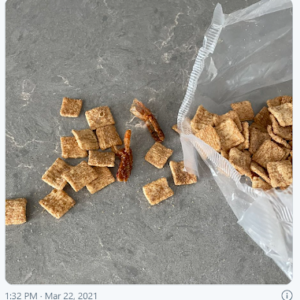 For General Mills, it was impossible to sea (pun intended) this coming. And for those of you who have been living under a rock lately, the tide has turned for one of the nation’s most beloved cereal brands.

Without diving into too much detail on the facts, a minor celebrity married to a formerly less minor celebrity found what he claims are cinnamon toast shrimp tails in a box of Cinnamon Toast Crunch. This became a social media meme, in part because it was a slow news week and in part because—eew!—shrimp in cereal.

The social media account for parent company General Mills did not do the best of jobs in what rapidly became a very public dialogue. It claimed the person who started all of this had simply found some crystallized sugar and while we are neither cereal nor shrimp experts, well … see the accompanying photo. 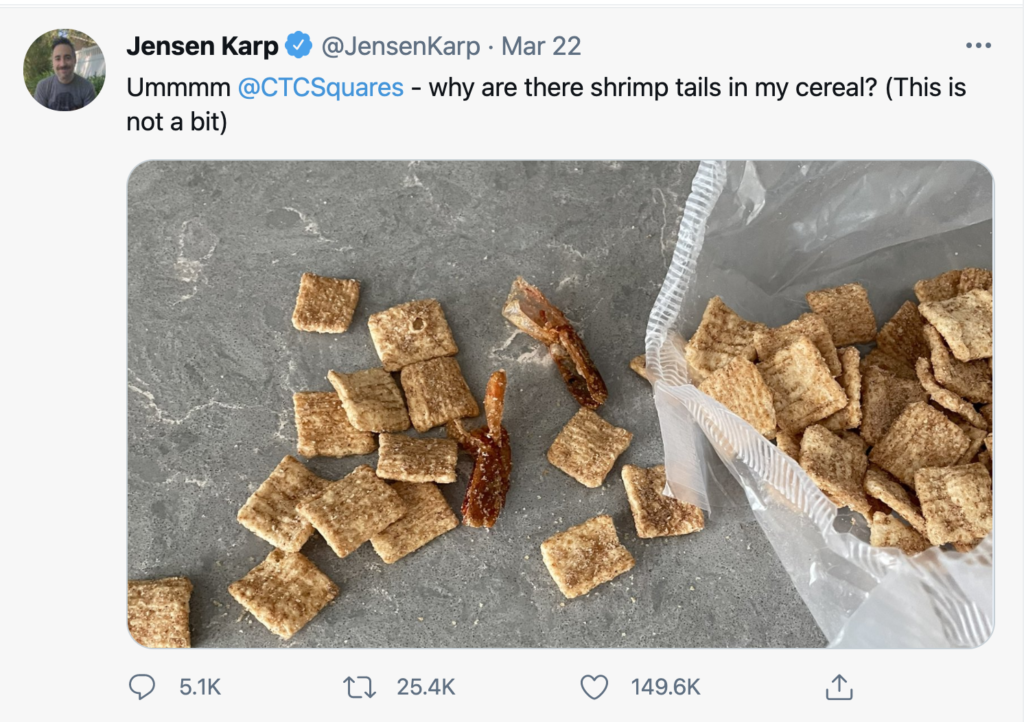 Which is where we find ourselves today – with an unresolved nautical mystery that has taken over social media not only in the United States but throughout the world.

On a serious note, some people are allergic to shellfish. There is no sugar-coating the reality that if there was actually shrimp in a box of cereal, those people could get very, very sick. And that is no laughing matter.

For the uninitiated, here’s how product liability for food works in the United States. Federally, and pretty much in every state, there is what’s known as “strict liability” when it comes to food manufacturers such as General Mills. In other words, the law holds them strictly liable for the personal injury caused by their products.

What this means in practice is that to be held liable for any injury caused by Cinnamon Toast Crunch, General Mills did not need to intend any harm or to be actually negligent. It is enough that they put a defective product (sugary kids’ cereal with shrimp tails) into the market, and that the shrimp caused an injury to a consumer. Jeffrey Zenna, a New Jersey lawyer and a partner at the firm of Blume Forte Fried Zerres & Molinari, agrees that the potential liability window here for the cereal manufacturer could be massive.

“Shrimp hidden inside a box of cereal and eaten by the consumer could be deadly. While social media has made light of the plight of the manufacturer, General Mills, there is a very important product liability issue here. Rather than denying that there was any chance that these were actually shrimp tails in a box of Cinnamon Toast Crunch, I hope the company is doing a very thorough investigation.”

Personally, I don’t believe the shrimp story. First off, the shrimp tails allegedly found in the box are too perfect. They are entire shrimp tails that seem to be broken off from the shrimp in the same place. From my experience with food, and knowing a little bit about the food business and manufacturing, what is far more likely is that there would be a fragment or two of a shrimp tail, not two entire tails, were shrimp actually found in a box of cereal. Even more likely would be no actual visible signs of shrimp, but rather shrimp contamination, which would cause people to get sick and would be found in laboratory analysis.

The second is the C-level celebrity bringing these claims seems less than credible and was probably starved for the kind of attention that this brought him until things turned dark for him.

Regardless of the person bringing this claim, there are really two lessons to be learned here: One about social media, and one about product liability. The social media story is simple.

Always be empathetic, say that you will quickly and fully investigate, and sincerely apologize. You need to just leave it at that. Nothing else you do is going to win you any points.

But, by far, the most critical issue here is product liability. Even though General Mills claims there is absolutely no way this could have happened, as they have claimed there is no seafood processed in the same facility, the potential liability is huge.

Certain foods in the world are inherently more dangerous than others. But when we think about the safest foods in the world, they should be foods that young children regularly eat. Boxed cereals are among them, especially those that are sweet and sugary, as Cinnamon Toast Crunch is. Literally, if there is one product that needs to be kept safe for kids, who may have any range of allergies, it is boxed cereal.

How this plays out over the next weeks remains to be seen. What is certain is that this should be a social media as well as manufacturing wake-up call for many, deep in the age of social media virality and instant public outrage.