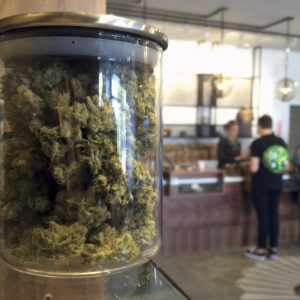 After Decriminalization, Supporters Call for Marijuana Legalization. Here’s How It Could Affect New Hampshire.

Less than a month after decriminalizing marijuana, legislators and lobbyists have begun open discussions on the potential legalization of marijuana in New Hampshire.

The General Court’s Criminal Justice and Public Safety subcommittee work session met on Wednesday morning to discuss HB 656. Sponsored by Rep. Glen Aldrich, R-Gilford, the bill would legalize and regulate the recreational use and sale of marijuana in the Granite State.

Major points of the discussion centered around the effects of a commercialized, legal marijuana system in New Hampshire upon taxation, law enforcement, and public safety.

The original legislation proposed by Gilford called for tax revenue from legal marijuana to fund drug and alcohol prevention programs for children and county property tax relief. Rep. Tim Brewster, R-Epsom, introduced an amendment to HB 656 which would provide tax relief to municipalities rather than counties.

Paul Morris, a local businessman, said lawmakers should include property tax relief in the final legislation but ensure it only applies to residential properties instead of subsidizing larger commercial properties. He also said the legislation should tax cannabis by the percentage of sales rather than by the ounce or flower, predicting the state would price itself out of the national legalized cannabis market.

Rick Naya, executive director for the New Hampshire chapter of NORML, a marijuana advocacy group, said the proposed taxes would be too much on a fluctuating commodity like cannabis and should mirror the state’s tax base for alcohol. By having a lower price than other states, New Hampshire would be able to maintain its market integrity and entice buyers from out of state.

“We need to be prepared so when we begin taxing our cannabis, we don’t excel beyond a margin that’s not going to allow people to come to our state or bring their product illicitly here to undercut our market,” Naya said.

Naya has been working with legislators in both houses on an additional bill aimed at protecting farmers who will assist the cultivation of cannabis. The proposed 2.5 percent tax on the gross net weight of dried flower would go directly to the city where production is located, which Naya said would be a “windfall.”

Matt Simon, the New England Political Director of the Marijuana Policy Project, also a marijuana advocacy group, said the use of legalized marijuana revenue to alleviate property taxes and supply the Alcohol Fund serves as a consensus solution. According to Simon, tax analysts are still split on the approach to a per-ounce tax versus a percentage tax, saying the use of both provides market stability.

John J. Bryfonski is the Chief of the Bedford Police Department and previously worked in the Drug Enforcement Agency for 27 years. He represented the New Hampshire Police Chiefs Association, urging the committee to be deliberative and analyze the upcoming study commission on potential legalization.

He said it is important to understand the experimentation of states which legalized marijuana has produced unclear results, calling it an “incomplete record.” Both Colorado and Oregon have seen an increase in investigations into illicit distribution, trafficking, and cultivation since legalizing marijuana in 2013, according to Bryfonski.

New Hampshire also has some of the nation’s highest marijuana usage rates, specifically among teens and young adults. Bryfonski said this presents a risk for creating a commercialized retail market for legalized cannabis, especially as New Hampshire grapples with the ongoing opioid epidemic.

A potential concern shared by public safety advocates and cannabis advocates is how legalized marijuana could affect traffic risks in New Hampshire. The method to determining how much THC can impair a driver is unreliable since it cannot be tested through a breathalyzer like alcohol. The metabolites from cannabis can also be detected for up to a month, meaning those driving may not be actively using or impaired by marijuana in their system.

Bryfonski called for a scientific calculation to “effectively and fairly” determine cannabis impairment while driving, though police don’t currently have reliable approaches beyond their own judgment. Last month, the Massachusetts Supreme Judicial Court ruled routine field sobriety tests could not be used as conclusive evidence of marijuana intoxication.

NORML’s Naya argued the data on marijuana’s effect on impaired driving is skewed due to legalization taking place so recently, adding the discussion should focus on adults making choices the same way they do with alcohol.

Annika Stanley-Smith, a substance misuse coordinator for Capital Area Regional Public Health Network, said the state needs to decrease access to marijuana. Since alcohol is the most abused drug in the state, she said marijuana could experience similar treatment if it were commercialized.

According to Stanley-Smith, New Hampshire has the lowest rate of perception of harm in the nation, which has coincided with a public interest in marijuana legalization. She said marijuana is not harmless and warned normalization, including retail storefronts for dispensaries, public advertisements, and the drug’s distinctive odor in public areas would adversely affect children.