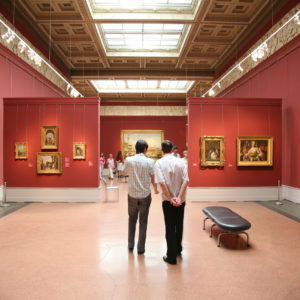 Elections bring certain terms into vogue in American public discourse. One of the words to emerge in the flotsam after 2016 was “populism.” The term encompasses both shallowness and breadth, an appeal to the masses, but not necessarily to taste or culture. Turning toward the many, rather than toward the educated or tasteful, is not a new trend in American politics. In fact, this impulse was one of the defining characteristics of American democracy highlighted by de Tocqueville more than two centuries ago. Just because a populist element exists in American culture does not mean that it should necessarily be fostered. After decades spent broadening the appeal of the arts by trying to make them more accessible and less threatening, critics, philosophers, and even lovers of artistic beauty are questioning the desire to diminish the differences between good and bad art, high and low culture, and ideological art from expressive art.

At the University of Arizona, composer Daniel Asia has founded a new initiative to give students the opportunity to consider some of these questions. The American Culture and Ideas Initiative “celebrates the American intellectual experience, especially the rich legacy of high art, music, and dance, and the philosophical principles of the founding of America,” emphasizing the foundations of the western tradition as in the confluence of the cultures of Athens, Jerusalem, Rome, Berlin, Vienna, London, and New York.

Within the art world, the combination of identity politics and the American democratic impulse are making fine art both easier and more difficult to encounter all at once. In America today, there are more opportunities to experience art than ever before. Over a period of fewer than three years, more than $4.95 billion was spent to expand art museum facilities in many major cities. At the same time, the experience of art–be it painting, opera, music, dance, or something else–is increasingly shadowed by interpretation.

“It’s this weird world of famine and plenty,” said Heather MacDonald, a fellow at the Manhattan Institute and fan of opera. She described how today’s opera audiences both have access to more performances and a higher degree of musical proficiency than at many other points in time, even as directors are increasingly heavy-handed with their interpretations of classical pieces. The trouble, she finds, is when these interpretations begin to disrespect the genre itself by losing fun of the joy and delight at the heart of the musical and dramatic performance.

“Directors should not lose sight of the power of melody and harmony to move human emotions,” said MacDonald, who characterized an operative performance as an attempt to convey beauty and grandeur through music.

Some times these changes are the result of the political leanings of artistic staff or faculty. In the world of visual art, however, the art world is struggling to adapt to the smart-phone age. Eric Gibson, editor of the Leisure and Arts page of the Wall Street Journal, described how this is leading museums to design exhibits that treat art as information. On average, a visitor to an art museum spends between 15 and 30 seconds looking an any particular work. Considering the hours of careful work that went into a painting or sculpture’s creation, this might seem like a paltry return already.

“The problem is that works of art are not interactive,” said Gibson. “They don’t continually reconfirgure themselves, changing shape and appearance at our command, like the images on a computer or tablet screen. They are static and they are too delicate and precious to touch or swipe.”

Instead, the experience of art requires time, stillness, concentration, and an inward focus, all things difficult to accomplish in the setting of an app. When museum exhibits are designed to encourage patrons to visit the museum website for additional information, or to follow along on an app, they distract the focus from the art itself. Previous exhibits were designed to leave the individual in contemplation of the work, allowing him to come to its own interpretation of its meaning and significance. Exhibits were generally arranged in chronological order, so that a visitor could come to understand the story of artistic progression and perhaps feel that they too were participating in this journey.

More contemporary exhibits have left behind this design. Many of them are organized thematically, or look to present details about the background of a work, distracting from the focus on the art itself. One local example is the planned Eisenhower Memorial for the National Mall, designed to include an app. This is a far cry from more traditional memorials like those to Lincoln and Jefferson, which honor the works and words of the two presidents in a way that can be understood fully in the present moment.

Understanding a work of art is not to say that it can have only one meaning, cautions British philosopher of aesthetics Roger Scruton. Museums are built to let the public look. This in itself realizes that personal response is at the heart of art itself. Yet, taste exists in order to help to provide a ranking of art and also an ordering of human desires.

“Taste is something learned by understanding the effects of our actions and manners on others,” said Scruton. He used the example of learning to dress in a professional manner and the individual’s choice to do so for the appropriate occasions.

For the world of art, this connection between seeming and being becomes all the more important, Scruton argues. Taste in art both illuminates and directs the soul, appealing to higher characteristics of the human experience. Art that exists only to make a political point, or to shock or disgust, is therefore a perversion of the form.

It might seem a radically judgemental statement. At the same time, it is in the same vein as the everyday judgement of what constitutes music, rather than noise. The experience and creation of art are inherently human and demand a certain depth.

“While animals make sounds, they cannot make music,” said Asia. “Music is a human language for the human experience. It is supposed to have expressive meaning and signify something of weight.”

The complexity at the heart of art comes because beauty itself is a thing of weight. Art, in providing even a momentary exposure to beauty, is itself an enriching experience, something human rather than political. This provides both its timelessness and its eternal worth.

“The art experience engages our experience and emotions, it exposes us to beauty,” says Gibson. “It can connect us with the past, with different cultures and points of view. It can expose us to the human condition.”