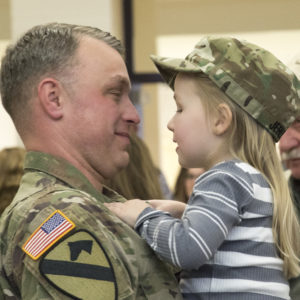 The Department of Defense (DOD) is backing a growing grassroots effort nationwide to designate local schools as military friendly because of the huge benefits they provide the children of U.S. service members when transitioning into new schools.

For 2021, the DOD staff is dedicated to working with states, which have recognized as a “key issue” state-sponsored Purple Star School programs to support service members and their families.

“Military children face issues such as gaps and overlaps in curriculum, different graduation requirements, and course placement disruption, as well as difficulties related to socially and emotionally connecting with a new school and community,” according the Department’s Defense State Liaison Office website.

Part of the answer is for states to enact Purple Star programs, which “primarily designate schools as military friendly once they demonstrate a major commitment to students and families connected to our nation’s military.”

Military-connected children are unique among K-12 students because they move every two to three years. The many transitions throughout a military child’s K-12 years into new schools can disrupt a child’s education as well as their social and emotional well-being.

On any given day, thousands of military children may be facing a new school, new teachers, new school culture, new curriculum, new graduation requirements — and now in some regions all through the prism of distance learning.

DOD is taking a keen interest in local schools because leaders know that if school quality isn’t up to snuff and if the schools aren’t effective at integrating military children, service members might well vote with their feet and depart the military. Local schools more than ever have become a military readiness issue.

Schools with the Purple Star designation let military members know that they are dedicated to helping their child gain the educational skills necessary to be life, workforce- and college-ready.

The designation also signals that a school supports the social and emotional well-being of military kids adjusting to new schools and the absence of a parent during deployment. These programs are so successful, searching for a Purple Star school is often the first thing service member parents do upon receiving Permanent Change of Station orders.

My organization, the nonprofit Military Child Education Coalition (MCEC), has launched a major effort to encourage all states to start up such a program, because there are military personnel nationwide and because these children are moving locales all the time.

Purple Star School programs are established by a state’s education authority or by an individual school district. Each state or district sets the criteria individual schools must meet for designation, but MCEC recommends four broad requirements that are underpinned by research commissioned by the U.S. Army Community and Family Support Center.

These include requiring that schools:

— Designate a staff member as a point of contact for military students and families.

— Establish and maintain a dedicated page on its website featuring information and resources for military families.

— Provide professional development for staff on special considerations for military students and families.

DOD explains Purple Star Schools are so essential for U.S. service members and their children.

“The average military-connected child will experience six to nine different schools during their K-12 education experience,” according to the Defense-State Liaison Office websites, adding that,  “issues surrounding school transition have become a top priority for families and some schools.”

Educational disruption precipitated by school transitions is something military families live with all the time, pandemic or not.

Purple Star School programs represent at least one way to temper disruption and help ensure that military-connected students are not an afterthought as their parent serves the nation.

Becky Porter is president and CEO of the Military Child Education Coalition. She wrote this for InsideSources.com.